To be ensure not to miss the sunrise, you have to get up early.
You also have to calculate the way until you are on your desired spot. But sometimes it happens, that I’m so early, that there is no sunlight and instead there are some strange light points in the sky.
Normaly I’m hanging boring around but this time I was playing a bit around with my camera. I was clicking here and clicking there, fiddled and fumbled on all the useless knobs on my photontrap and at the end I had this useless image on my memory card. Only the strange noise in the sky and hard shadows of a dull moon.
I have to plan my journeys better to be at the right time on the place, so I don’t have to waste so much time with waiting for the sunlight… 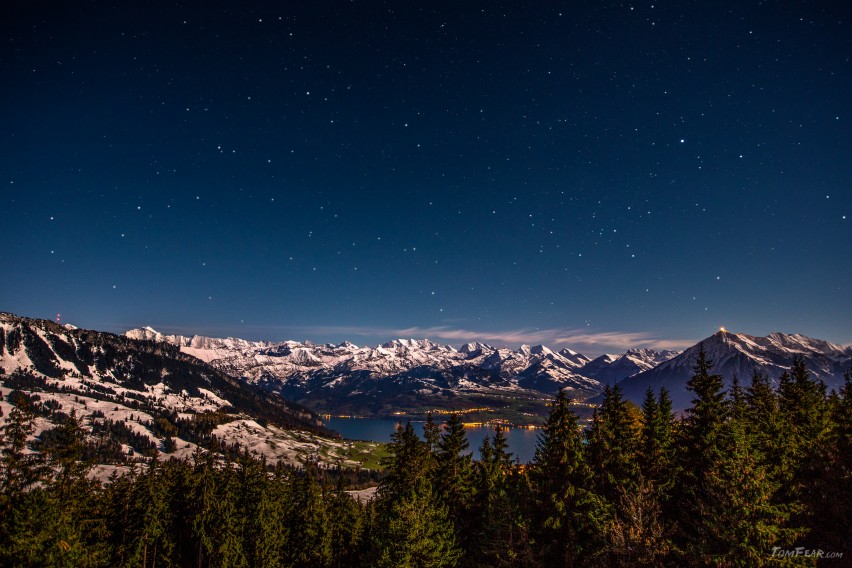 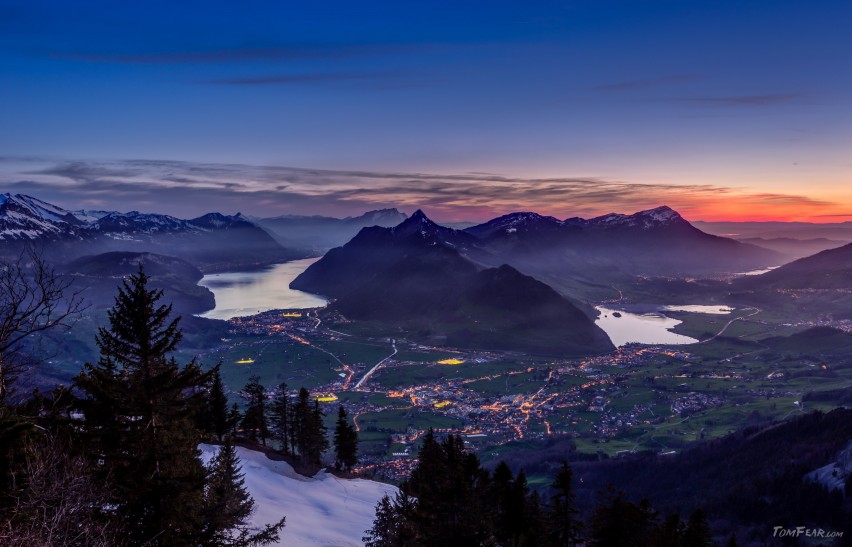 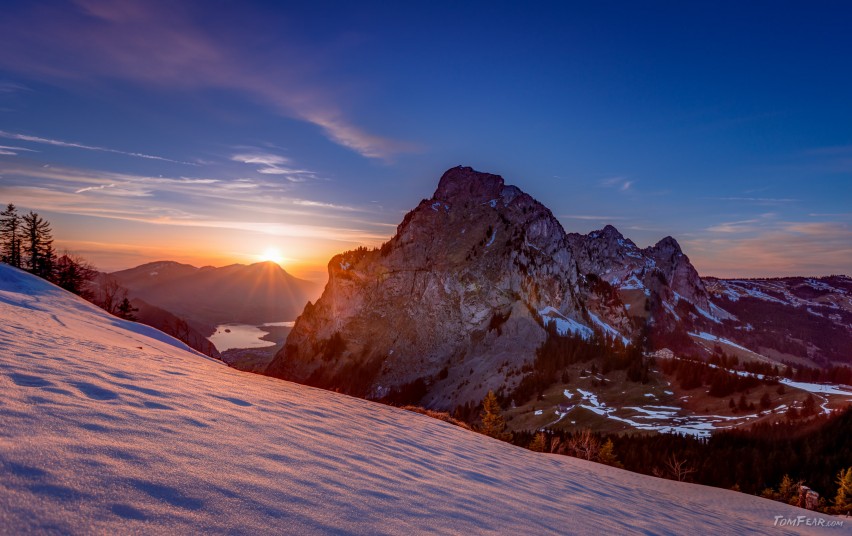 Before you get some dreamy alpine images, you have to hike to the photo spot.
It was a nice, warm spring day when I was walking to the Rotenfluh and I could still use the snow shoes. I like to walk with my snow shoes through the white mountain landscape.
Okay, I had the snow shows mount and unmount several times because not every part was still snow covert. But I was really pleased that I had my snow shoes with me. The snow was already wet and grainy and without my feet extensions I was always sliding on the ground. But what could be more nice as an awesome sunset in spring with green grass and snow together? Pure nature! 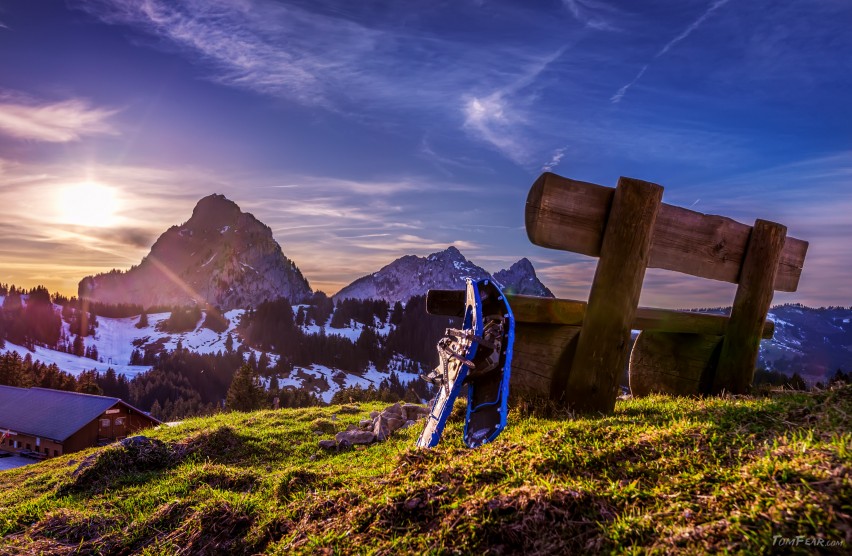 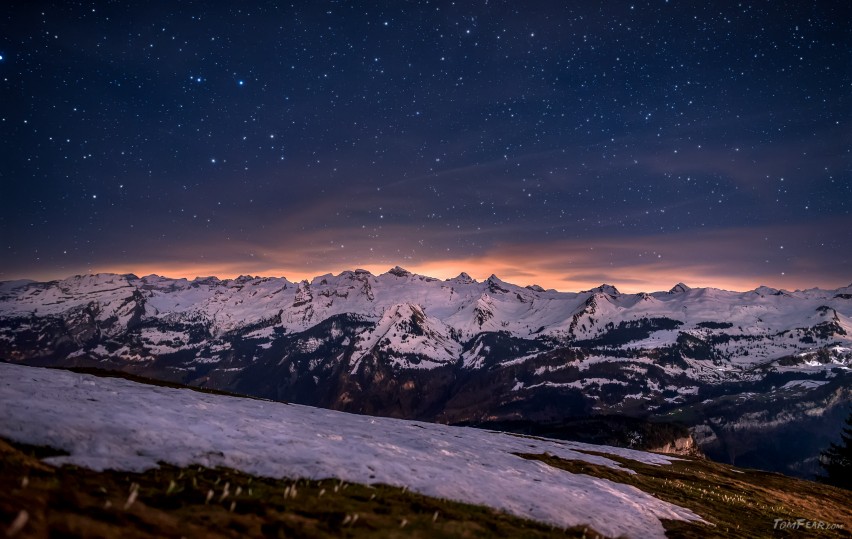 Last night I was for a short evening trip on the peak.
Just decided, because of the clear weather, I was for a few hours on a night tour. This time I visited the Rotenfluh near the Mythen, the mountain behind me. I drove to the Ibergeregg and walked about an hour to this viewing point. Good I had my snow shoes with me, there was still snow covering the ground and the snow was very slippery, but with my snow shoes I walked easily a steep red ski slope upwards. Okay easy with the traction but I had always be careful not to step on my tongue.
Anyway, I spend a few hours on the top with a spectacular starry sky and a good view to the near mountains. But for the moment is this the only image I processed to see what you can expect 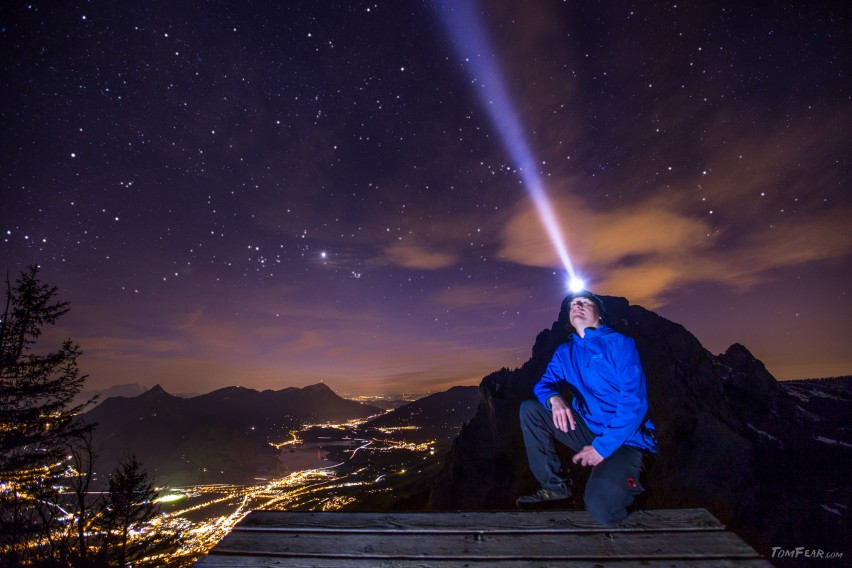 A clear sky, the bright moon and sparkling snow.
Next winter, if you spend some nights in a snowy area, like a winter resort, you should go for a walk in the night. And do this not only between the bars, go through the forest and enjoy the silent night.
Someone asked me, whether I had photoshoped the sprinkels in the snow, because she couldn’t belief to see it so clear. But I can confirm that you will see the sparkels and it glittering all around you while you are walking.
It’s like in a fairy tale to walk nightly through a winter wonderland, you have just do it. 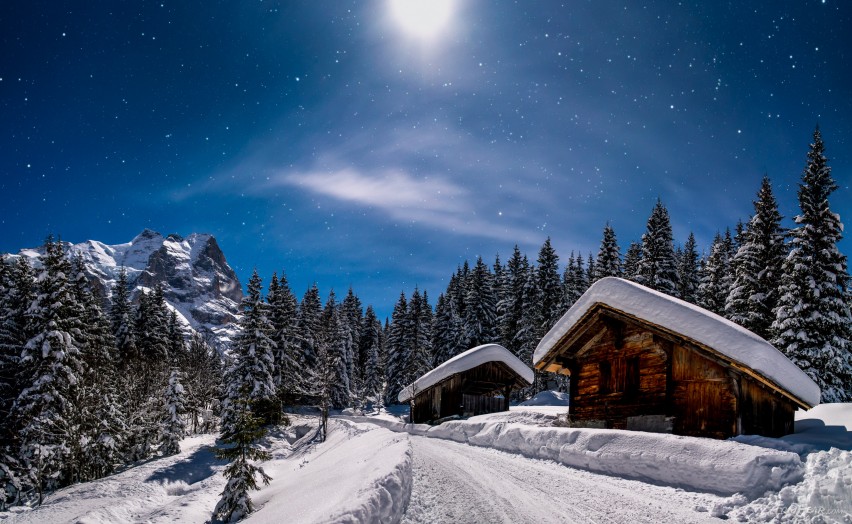 Looking for great spots and planing interesting tours while you stay in the mountains.
But *sigh* like the last few times I spent a few days on holidays, the weather luck was not with me. I drove with heavy snowfall up to Sedrun and the snow was falling the whole night. In the morning, the landscape was covered with beautiful fresh snow and the sky was still covered with clouds. Time to go for a walk with Bubu, while I was walking the sun was coming out and burned down on the snow. Hey, I thought, the weather is getting better and my mood was getting better too. But then the clouds are coming back again and before the sunset light was colorizing the sky, the sky was vanished again.
This image from the Oberalppass, I could take short before the clouds covered the sky completely. You can see the trail of the path up to the mountain I would take. But more than this image I couldn’t take.
The only thing I could keep was my sunburn. Because there was no sun, as I started with Bubu and I forgot to use my sun blocker cream. And well, I could tell you, this was a real burner, during the afternoon I become more and more reddish and at the evening I was red like Hellboy from Marvel.
So the only colorful thing I could take home, from this holidays, is my face, therefore: Happy easter :/