It was a cold winter day and short before the sun disappeared. And I was to the right time at the right place, to take this beautiful winter sunset. The sunset in cold winter days are not so colorful as in other seasons. But look at the wonderful pastel colors in the sky. Isn’t that awesome, isn’t it? So every season has its own charme, to get great images. You have just to do it!

This is not the first image from Tschappina. And so you may know, we were not so lucky with the weather. At the first time it was foggy at night. At the second time it was foggy at night too. And I thought I checked the weather as best as I can and controlled all webcams before I was driving two hours to the destination. But the fog, this beast, came out after I was on my way. And guess what kind of weather it was at our third trip? No fog, clouds instead.
But we’ve got some luck. I jumped out of the car and was disappointed about the cloudy sky. Stefan was looking at the sky too and told me; watch, there is a small hole, maybe it gets bigger, let us try this and go for a hike.
So we did it and it cames better, not clear, but clear enough. And as you saw my image from yesterday with the light pollution and the bright full moon, watch this and see how many stars you can see in the sky, when it’s more dark than in our cities. 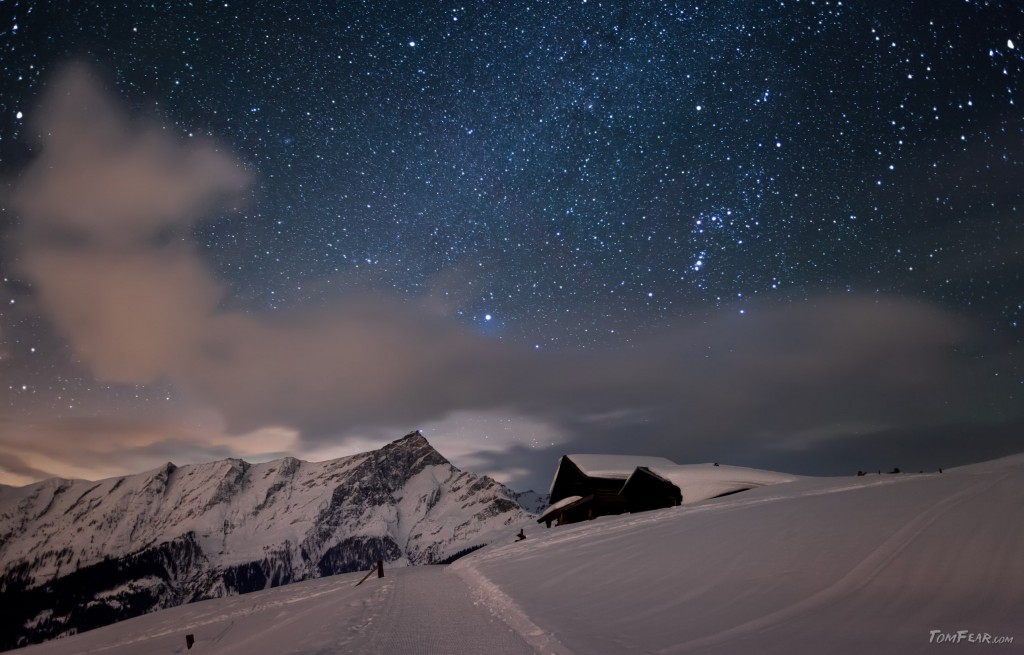 The milkyway in the vineyard

Before I started nightly hiking in the mountains, I tested a lot in the flat land around my hometown. Although the light pollution is extreme high and the full moon was extreme bright, you can see the milkyway at the horizon. Because of the strong ultra wide angle lens and the angle upwards to the sky, is the horizon strongly cranked, but the sky is looking great. 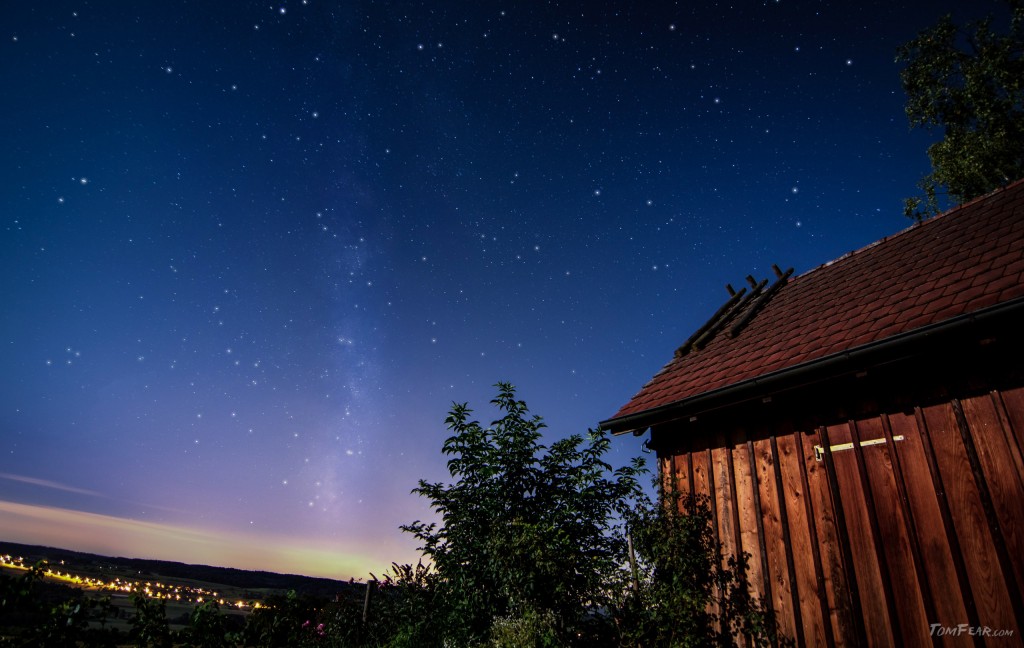 From rain to rain in Jontunheimen

It was one of  the worst day in series of bad days in this holiday. Most time it was cloudy or it was raining. At this stop, a take an image of the next rain starting, you can see the raindrops in the lake. While I took this moody image, my dog used his chance to get in the lake. And if he is in the water, he will not come out so quickly. He was cold, I could see it at the wave circles of his shiver. But do think he comes out? No! We need about 15 minutes until we could grab his neckband and pull him out. This little dog is so bullish!

A very clear sky in Glarus

On my way up to the Klausenpass, were I came to late to make some starscapes, I took this poto. It is somewhere in Kanton Glarus I don’t no more know where this exactly was. It was very dark in the valley, so I couldn’t see what I was shooting. But the sky was so clear and you could see so many stars. On the left side at the crest you can see the last moon light.
In the sky you can see as the brightest point Jupiter. In the upper middle you see the Plejades and at the lower part of the sky you see the star constellations Orion and the Orion Nebula, even with a wide angle lens at 11mm. 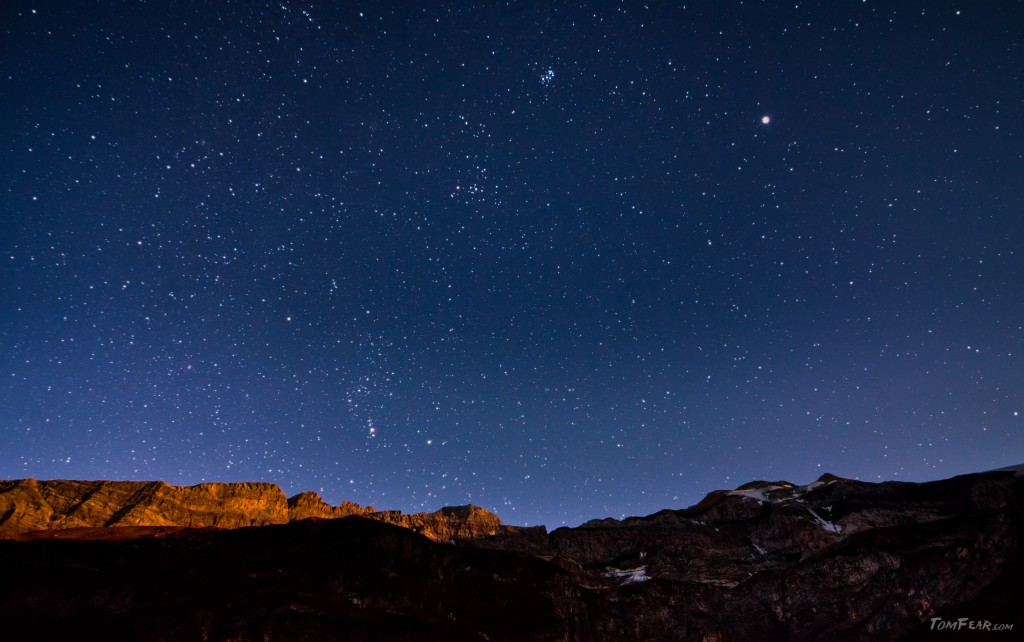 The weed in the sea of wheat

One day I was on an evening photowalk and shooting this and that, as I saw this symbolic situation. A single plant in a large cornfield, fighting its way to the light. In these gray days we can looking forward; the days will getting greener. For this image I needed one single shot and my fancy macro lens at f/2.8 to bring only the weed in the focus. 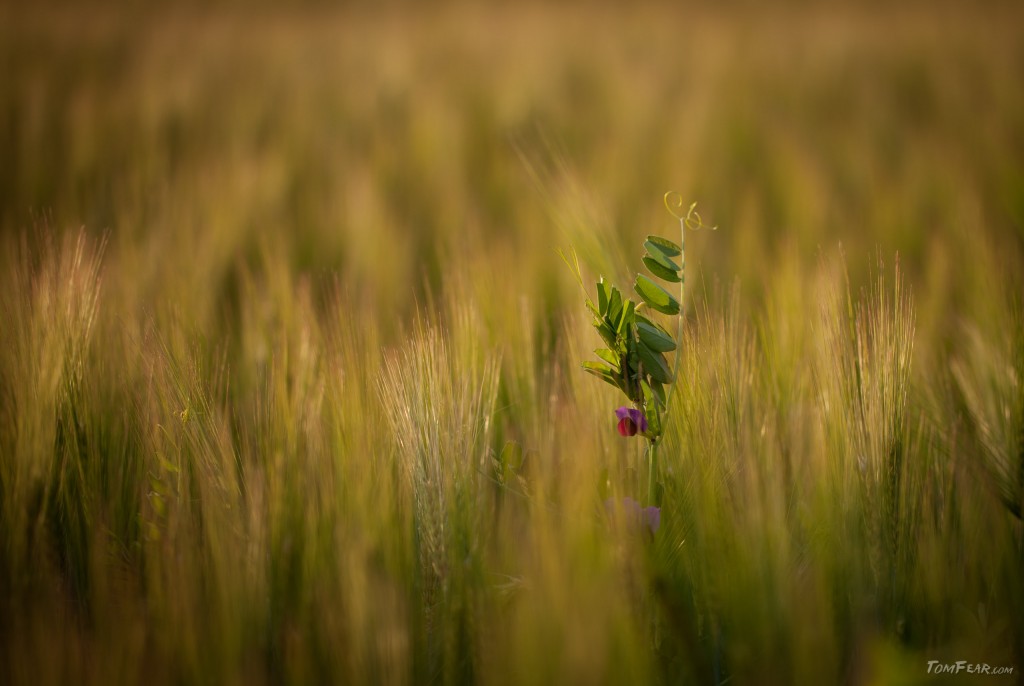 The sun was allready down and the stars visible, as I shoot this photo. But something’s strange on the image. Either the moon is burning or there is a doomsday meteor in the sky. The fact we are still here, excludes the 2nd possibility. But why is there smoke at the moon, I thought it couldn’t be smoke in the space without air. Or maybe they are right and there is also no space and the technicians fixed the problem with the fire. And yes, I think there are now more dark spots on the moon… 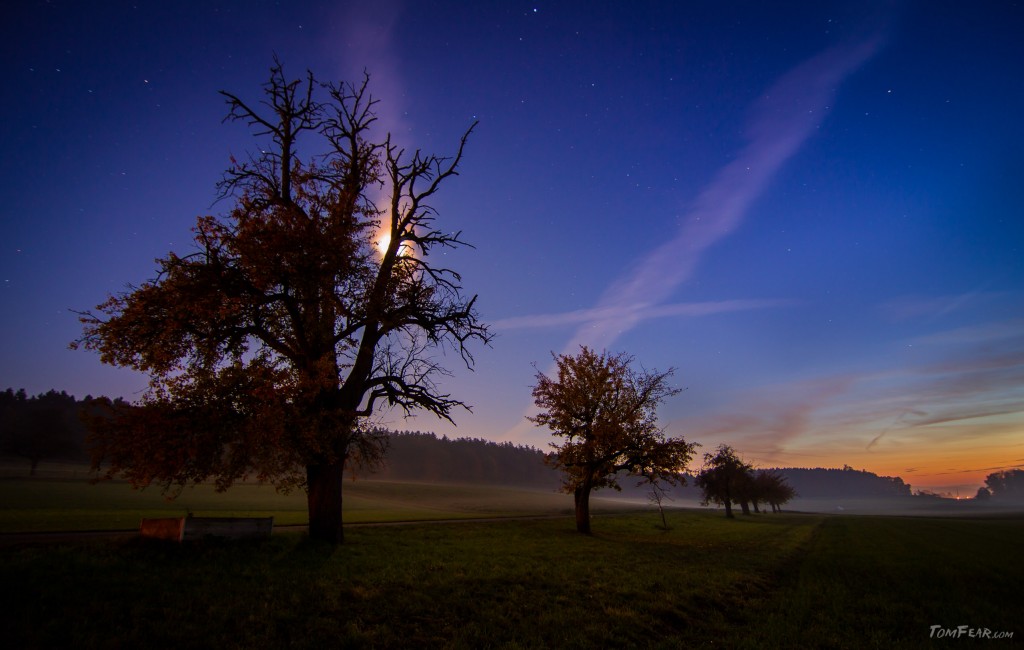 Yesterday I showed you a nightshot of the Eiger. On this image, I shoot next day afternoon, you can see down to the village of Grindelwald. On the left border you can see a path trailing up, somewhere there I was the night before and shoot the Eiger. On th right side you see the large shadow of the Eiger but you can’t see the mountain. This is maybe a normal tourist photo if you are walking from the Männlichen to the ‘Kleine Scheidegg’. It’s an easy afternoon walk and if you stay in Grindelwald or Wengen, don’t miss it. 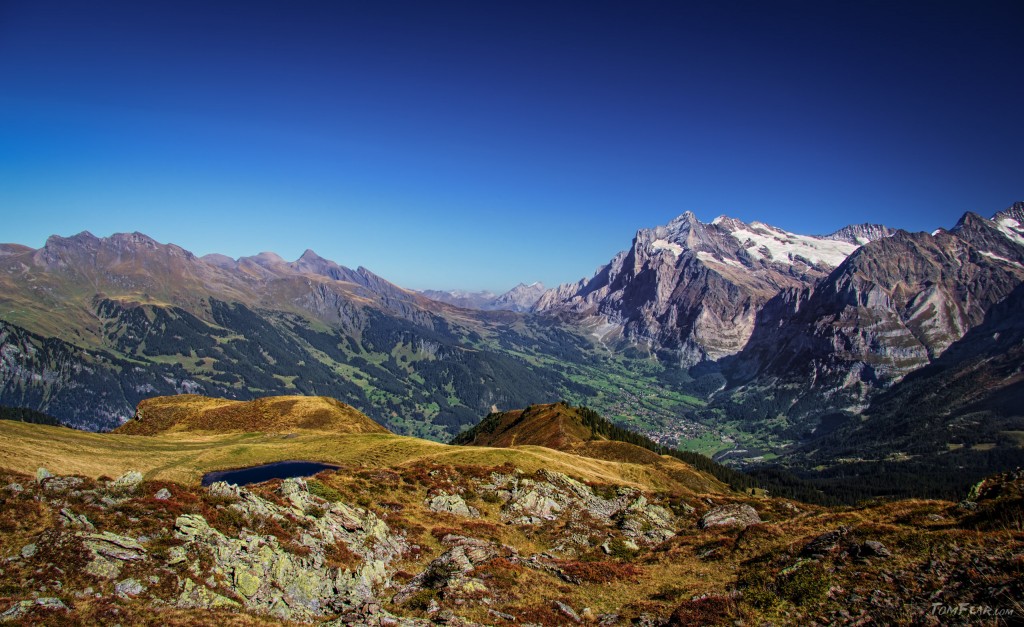 As you can think, I didn’t go to Grindelwald and take photos from the Eiger Northface only by day. It was clear, that I go to get some nightshots of this fames mountain and the best spot I found was the Bussalp, because there was a street up there. The problem was, you couldn’t drive this street without a permission. Luckily I found an officer at the down house which gave me this permission, so I could drive up there in the middle of the night.
It was a very dark night without any moon light but also without any clouds, so I had this clear view southward on the Eiger, Moench and Jungfrau.
For this image I took 8 shots for noise reduction with 1600ISO and my old Canon 60D.

This is another image of my picture series of the Togggenburg region. You can see mount Saentis with the large antenna, which is no more vertical because of the strong wide angle lens at 16mm I used. And the bright light behind the clouds on the right side, is not the sun, it’s the moon. But the most impressive part, how I think, is the star sonstellations ‘great wagon’. You can see it in the center of the image. Mostly you won’t see star constellations on nightshots, because of all the stars which you can’t see by eyes. But luckily there is a thin cloud which gives the brighter stars a glow and you can recognize the wagen.
I took this image by 8 shots for noise reduction, but I used for the sky part only one image for clearer clouds, else the clouds would be more blurred. 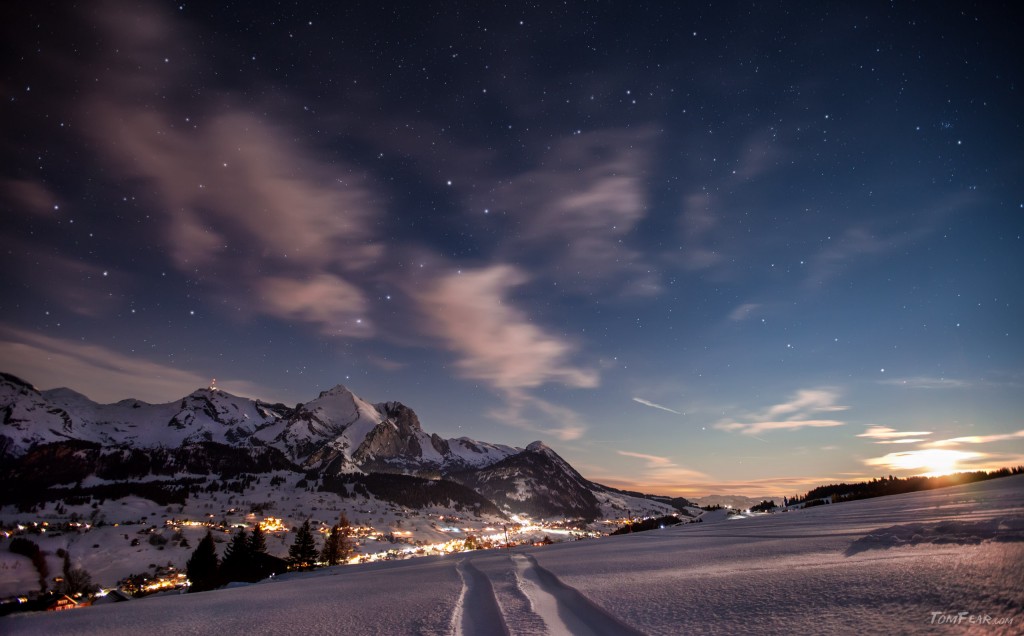