It’s autumn now, and we are in a foggy area here. And why not take some foggy images? I like this image with the fog fumes which are floating between the hills here in the Emmental.
Yes, it was not a sunny day, but in my opinion this is more interesting than a boring blue sky without any clouds. Okay this means you are a photographer. For sun fans isn’t what they want to have. Therefore if you want to take some images and it’s not a sunny day, don’t give up, you can take some interesting images anyway. 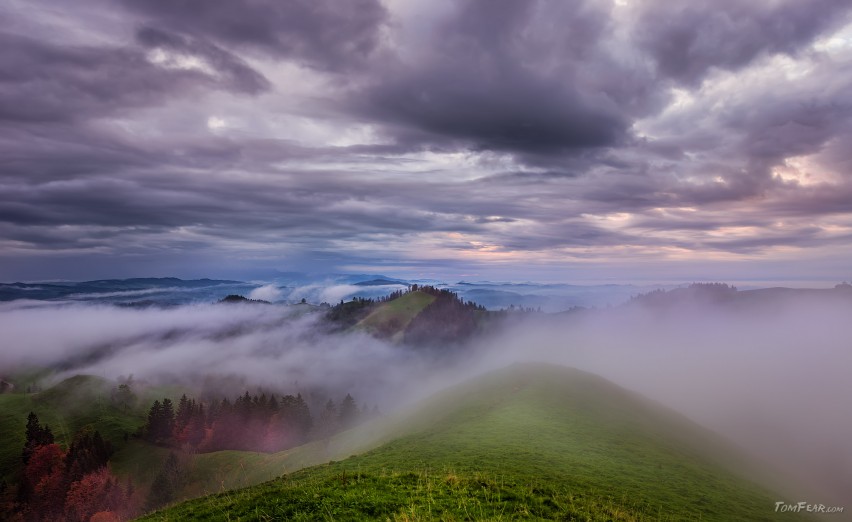 Last weekend I was near the bernese alps, where I wanted to take some sunrise or sunset images. Unfortunately the only day with clouds was exactly this day.
So I beg your pardon, I can only show you this boring image of a dull, cloudy day without sun. It was not a warm, sunny autumn day with all the amazing colors you can imagine. No the fog was covering the landscape while the clouds in an upper layer also covered the blue sky and our mother sun.
Therefore the only mood I can show you is this image of a dark, dull and colorless autumn day… 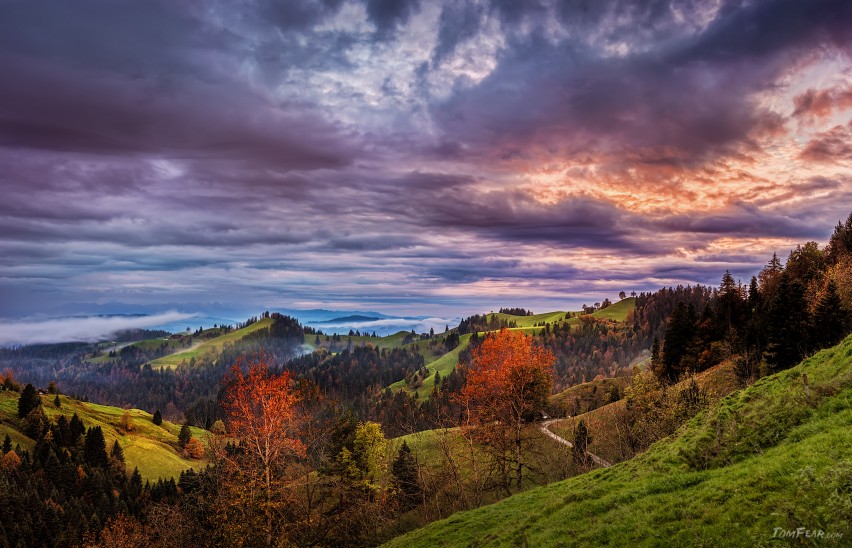 Now we stuck in the deep autumn fog. There are no sun rays coming through the thick gray mass. And after a really cloudy summer the sad thing is, the clouds are gone now. There are no clouds above us, if I would go up over 1400m then I could see the bluest sky you can imagine.
Therefore I need a memory for a sunny day in a warm summer, like here in the Provence. It was a warm, sunny and the air was filled of the fragrance from the lavender fields all around us.
Ahh, now the gray autumn day isn’t as bad as it was before 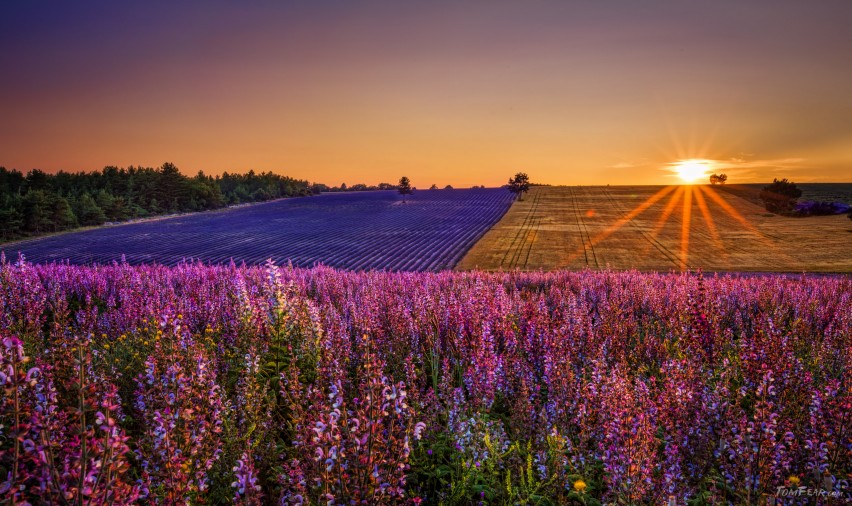 Long long ago, with my first DSLR in my hands, I was visiting the Yosemite Nationalpark. It was not my first visit there, the first time was in 1990, far away from any digital photo cameras, therefore I used an SLR without D.
But last time, I had a DSLR with me and no knowledge about photography. So I’ve got only a few photos which I like it. After then I learned so much about it, I think I should go for another trip to doing the images right

Now it happend, the mountains are covered with snow again. We had a long reasonably warm autumn, which is now replacing by the winter.
We will see, how the photo weather is in the next few weeks. Maybe we can shoot some amazing winter images, like this with the rising fullmoon over the bernese alps.
Anyway the next few days should be clear and I hope I can take some nice shots.

There was only short time, but I used it and drove for 24 hours up to the mountains. I had a full programm, first go for hiking in the afternoon, taking photos at night, take a short nap and up again go for the sunrise to the lake.
Then back to home because I had a business meeting at noon. So I was really at the end of my power after these days. But I also had some awesome images taken. And I don’t regret all the stress at the weekend.
Therefore lean back and enjoy the stunning landscape while the sunrise at this beautiful lake in the swiss alps. 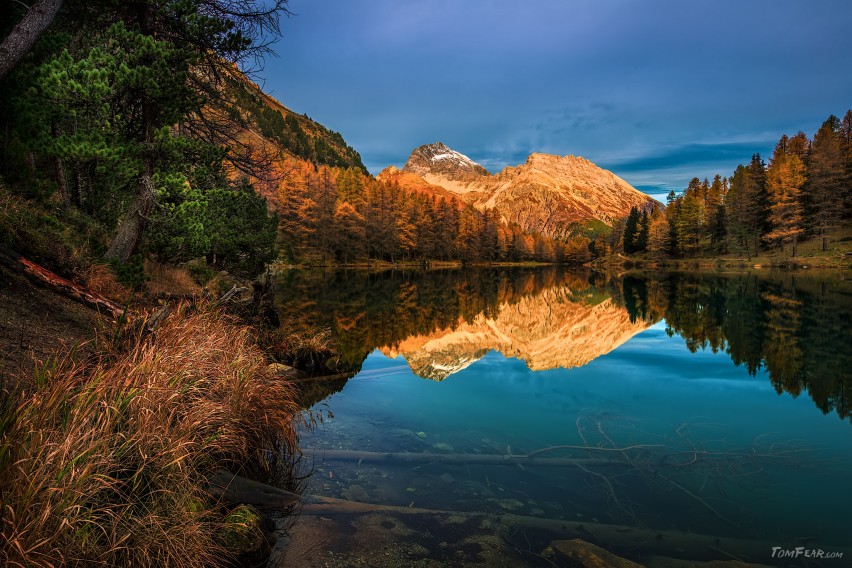 At this weekend we can enjoy one more time some really beautiful and warm autumn days, before next week the snow beginns to fall in the mountains.
Afterwards comes the bad time for hiking. All funiculars are making hollidays and the weather is anyway the most time dingy. But if this year is going right, then you can in approx. two month admire awesome winter landscapes in the mountains. We hope now for a short dry spell followed by a glorious winter. 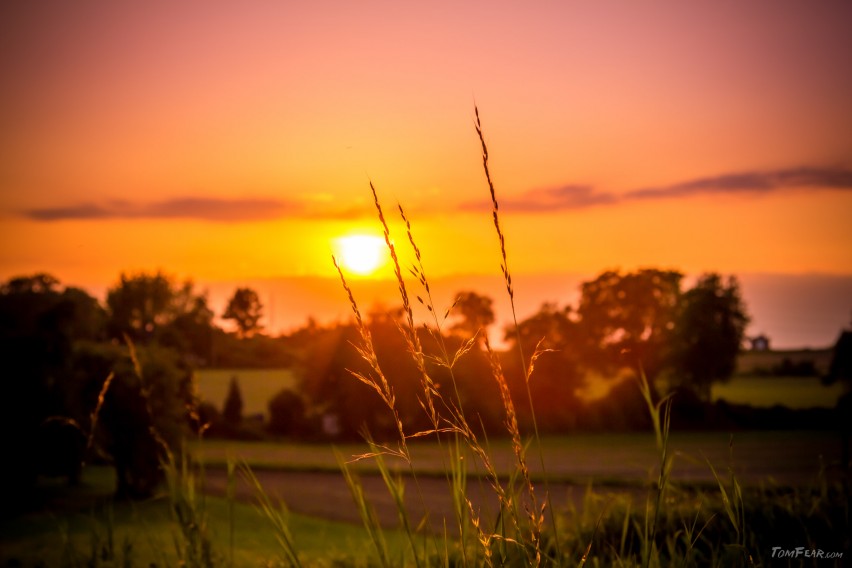 A breath of the Milky Way

As a central European is it not easy, if you want to take some pictures of our galaxy. First it is often cloudy and if there are no clouds, then the moon is shining.
But if at newmoon are no clouds in the sky, then you will recognize how strong the light pollution is. Here in Austria near the village of Warth, from the right is pressing the light of a settlement into the image and the interessting center of the Milky Way, where you can only see between May and the end of July, is at the beginning of August already hidden behind the horizon.
After all you can see the Milky Way very clearly and despite of a pitch dark night, I succeeded to get the surroundings visible on the image. 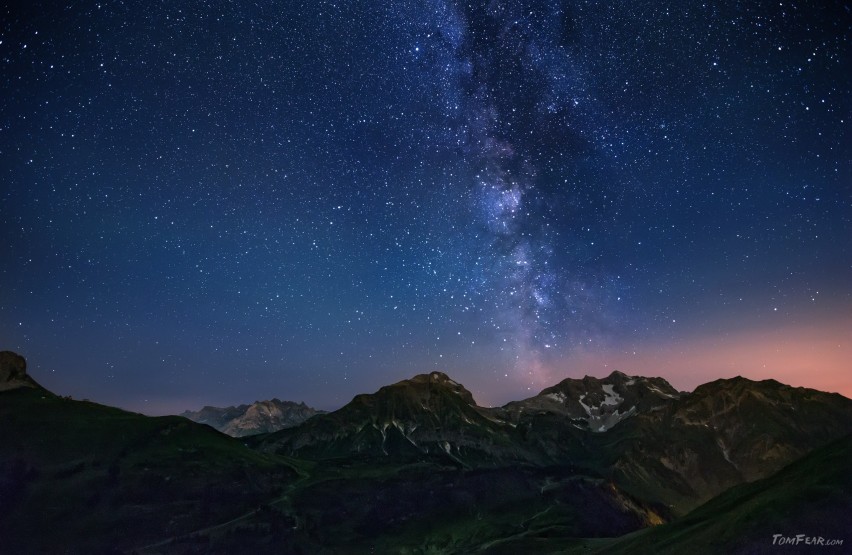 After the fog in the night the fields and the forests has thick enwraped, the morning sun freed us from the dull gray.
Only a short while later a wunderful morning shones with a blue sky. Who has thought, only a short while ago it was not possible to say where the sun would be in the sky.
And the fresh planted canola is waiting until the spring, when his yellow blossoms the whole neighborhood is filling with the lovely fragrance… 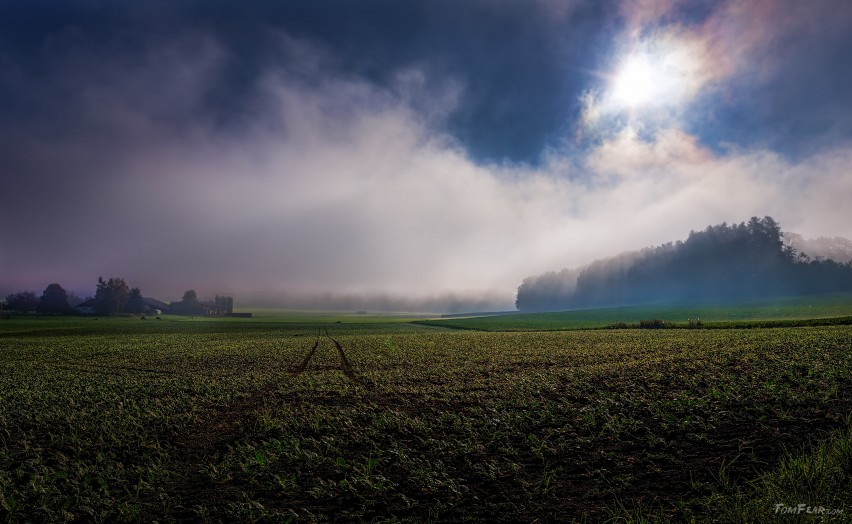 I was writing the blog post of yesterday and was looking casually through the window to the outside. It was a really dingy day with rain and mud.
But what were my eyes seeing there? The sky was glowing pink, in the east! Not in the west, I can’t watching there, no in the east. Okay, I opened immediately the other window, lean out and watched to the west. What a show, is there going on? There must be an nuclear plant exploded, the whole sky was burning.
Grab the camera, snatch the tripod, take the first shoes I can see, running out and drive with the car up to the near pond. Nearly I was to late again, but only nearly… And yes, after that I had wet feet again, this was worth of it! 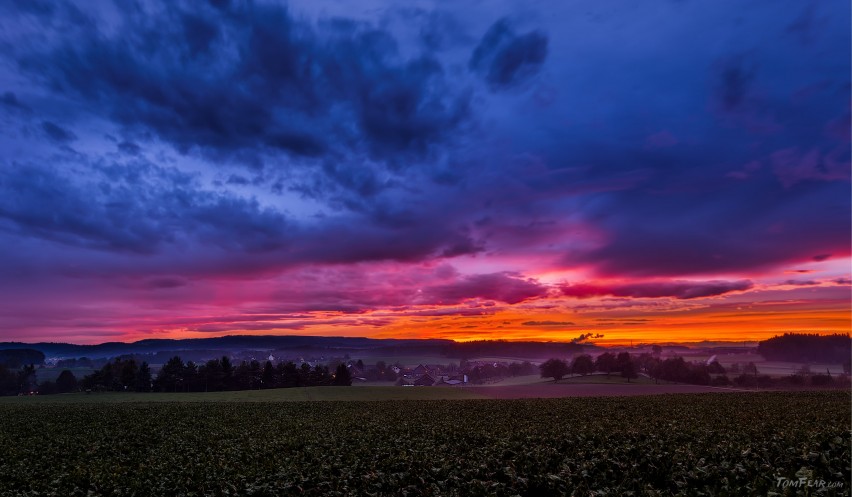