The night on the peak

It was a real hard piece of work to get up to the Selun with all the gear. But the sightseeing was awesome! Me and my friend enjoyed the stunning  view only a bit, but then the gear has to work. The first break I took, was when I realized the stars are going and the horizon is getting brighter. It was a good idea to climb this mountain, altough both way were hard to go.
I composed this image with 8 shots for noise reduction and 3 extra long exposures to brighten up th foreground. 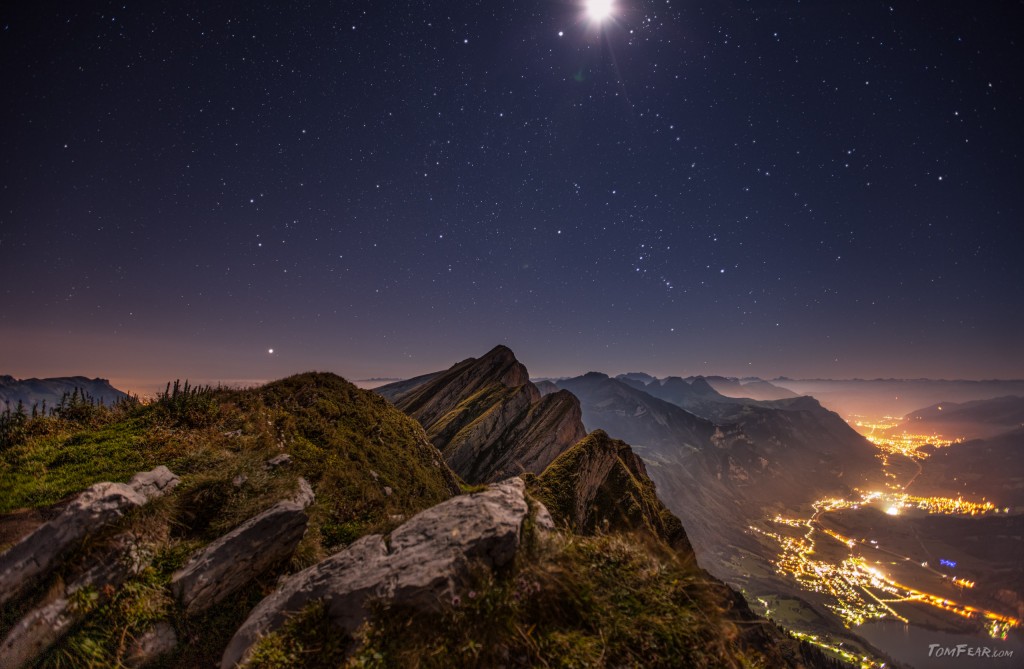 Dark clouds over the wheat

Mostly I’m too late for the right atmosphere, but this time I was at the right time at the right place! While sun was going down on my back, without any clouds, dark clouds where coming from the alps. It was so a dramatic lightning the deep standing sun together with the heavy storm clouds, it looks like a scenery for a horror movie. 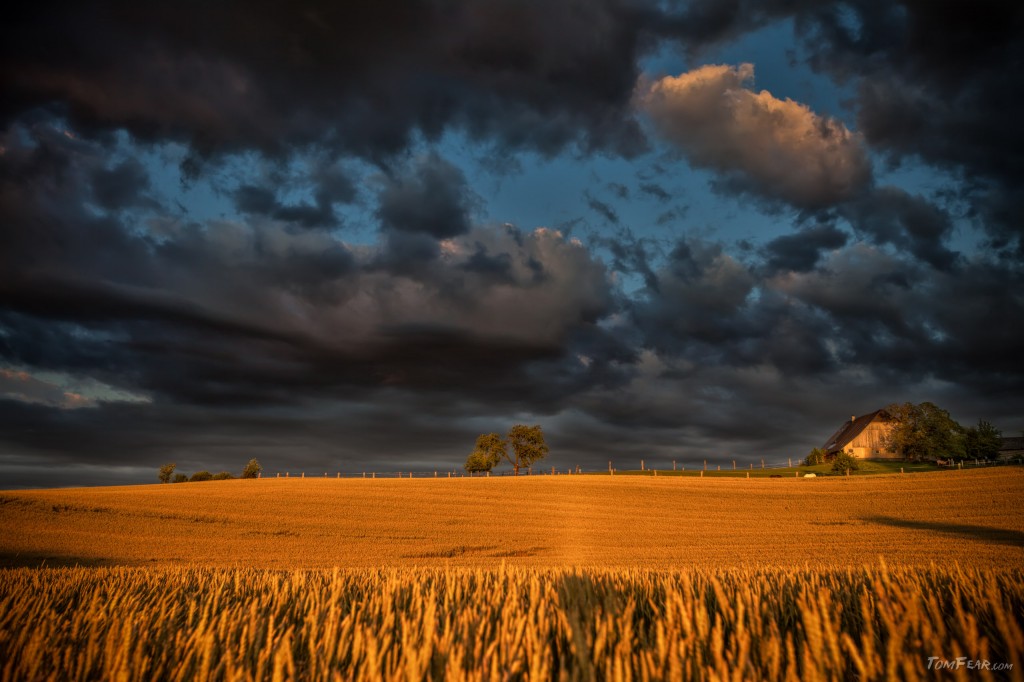 Every photographer knows, if the sky is getting red and you don’t have build up your tripod and a shooting ready camera, then you have lost. Because the time windows is so short to catch this perfect sky. But if you are in the far north, where the trolls are at home and you hurry up to get the sunset sky and you are so proud, because this time you was fast enough… Then you will discover you have endless time to shoot a sunset. The sun stays at the horizon as long as you never saw it. The reason is, you are so near the tropic of cancer. So remember, at the equator the sun is hidden within seconds, near the polar circle the sun will maybe never hide or only very slow

On our last journey thru the USA, we visited the Yellowstone National Park and drove along south. On the way to Jackson Hole you can see the impressive  mountains of the Grand Teton. You can stop at a stight seeing place and enjoy this massiv mountain front. I made this panorama picture from 8 shots and it shows nearly 180 degree. And because I made this picture at my very beginning of my photo adventure phase, I didn’t stay until the sun goes down, for better a lightning. But maybe this was better for my marriage

Watch this image in full resolution!

The spring is coming, earlier than other years. This winter was a bit strange here in Switzerland, in fact there wasn’t any winter here. It didn’t snow during winter time, we’ve got one month more but I personally think, the winter makes a curve around my home. So well no problems at all, I have only to drive farther away to see the winter

I shot this flower last spring with my macro lens. On one hand the camera and on the the other hand the leash with my buddy Bubu, which has no fun to wait until his human stopps to making useless and strange things. We calling here this flower “Weeping Heart” maybe anybody knows the real name in english. 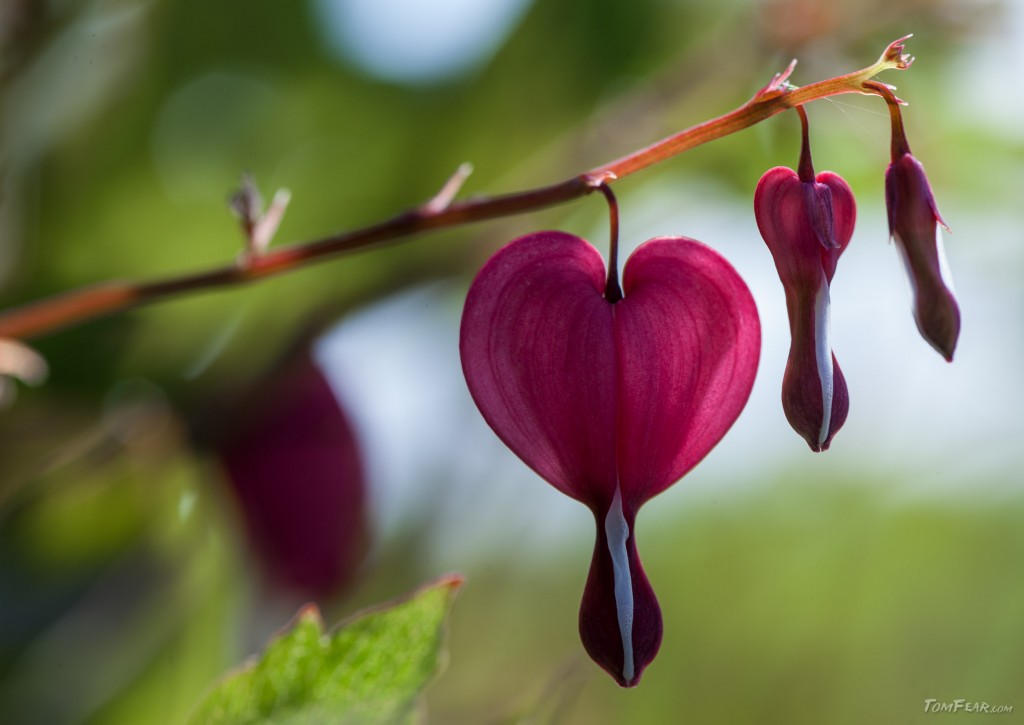 Planes on the sea of fog

I’m living below this fog, far away at the horizon. So I decided to climb up a mountain to see the sky. I took a cable car for the lower part and walked up the steep path up to the top, missed the sunset, like everytime, and enjoyed a wonderful landscape. This mountain is called “Mythen” and without fog you can see several lakes. But the lakes are now replaced by the sea, the sea of fog. And if you are check the horizon, you will see strange light curves. This are landing planes at the airport of Kloten. I made this image with a new technique by two shots of 180s.

Sunlight in the winter night

Yes you read correctly, sunlight. The bright spot on the right border is the rising moon and the time is about 22:40. Why sunlight you ask? Didn’t you know that the moon is only large dirt ball and all the light you see is the reflected sunlight? Okay we call it moonlight, but technically it’s sunlight. This is a fantastic thing, if you think the sun is so bright that a ball of dirt can reflect so much light to see the whole landscape at night. I mean this is really awesome, much more than thinking the moon is glowing, imho.
I made this image from 8 shots to reduce the noise. And forgot to take an image for the bright lights so I can’t bring back the burned out parts. 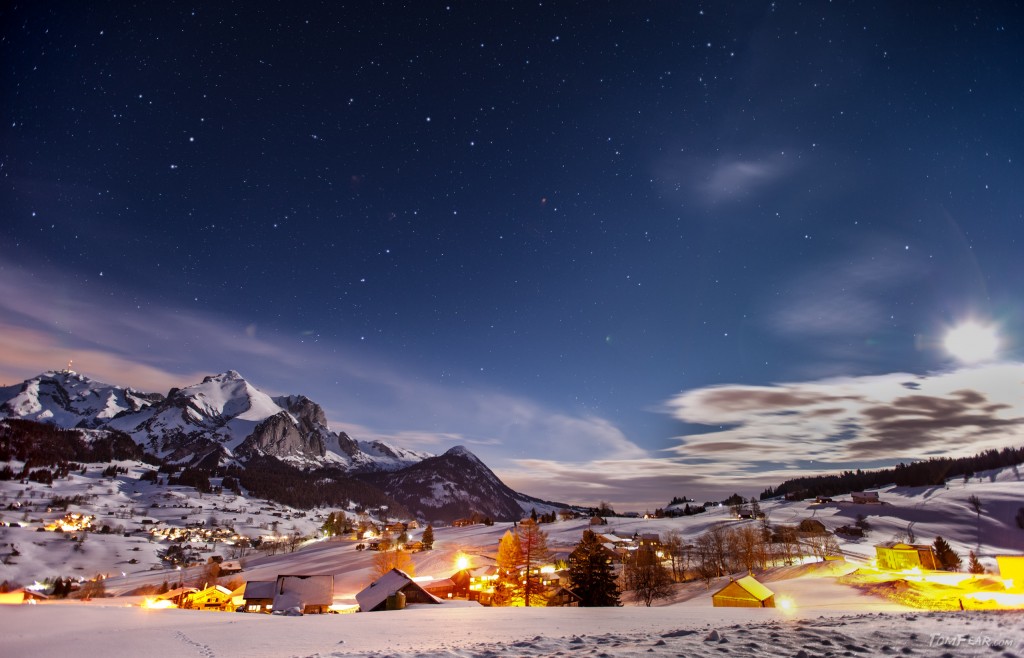 Cows on the mountain

Like mostly we were too late and missed the sunset. On this hike I was testing my brandnew outdoor equipment, tent, sleeping bag and backpack. Damn was the mountain steep and the equipment heavy I was short before a heart attack and I could use my tongue as a tie!
On the half way up, we saw the lake and the last sunset glow at the sky, so we stopped for a photo session, probably this saved my life. The cows in the front are a really nice eye candy, but the couldn’t sit still and I get only blurred cows. But all together I like this image, because there is everything on it: animals, a lake, sunset, mountains and the stars.

Near the place where my wife was grown is a nice vista point. If the sky is clear and the moon is not in sight you can see a wonderful panorama. And if you go at night you can see this alp view panorama before an awesome starry sky.
The strong light pollution behind the mountains, you can see, is from Italy over 100km away. That’s the reason you can’t see the milky way in europe so bad. Even the alps are to small to get a pollution free sky. And check the exposure date, you know if the sky is good I’m always shooting ready 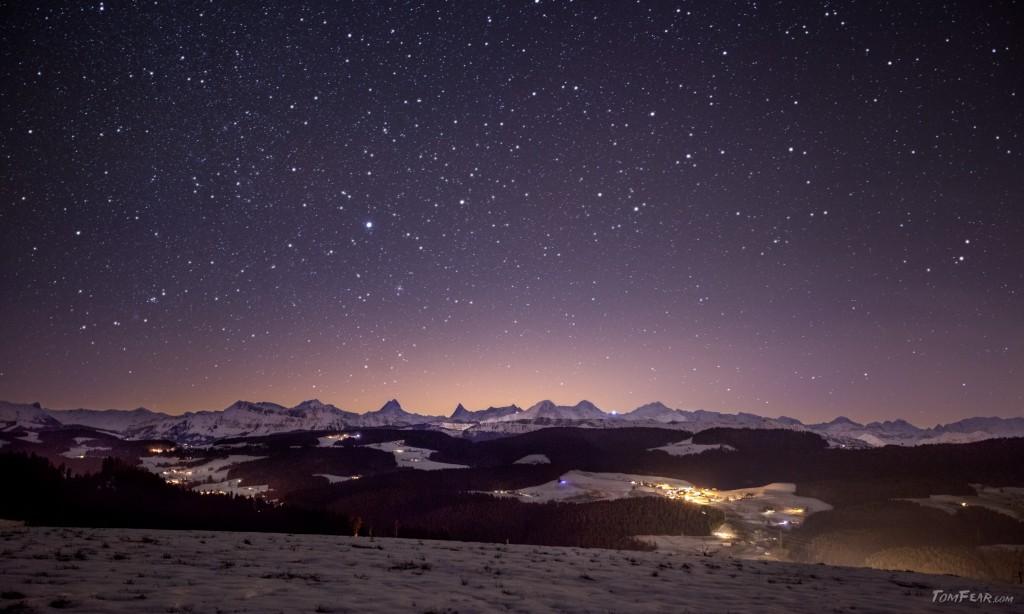 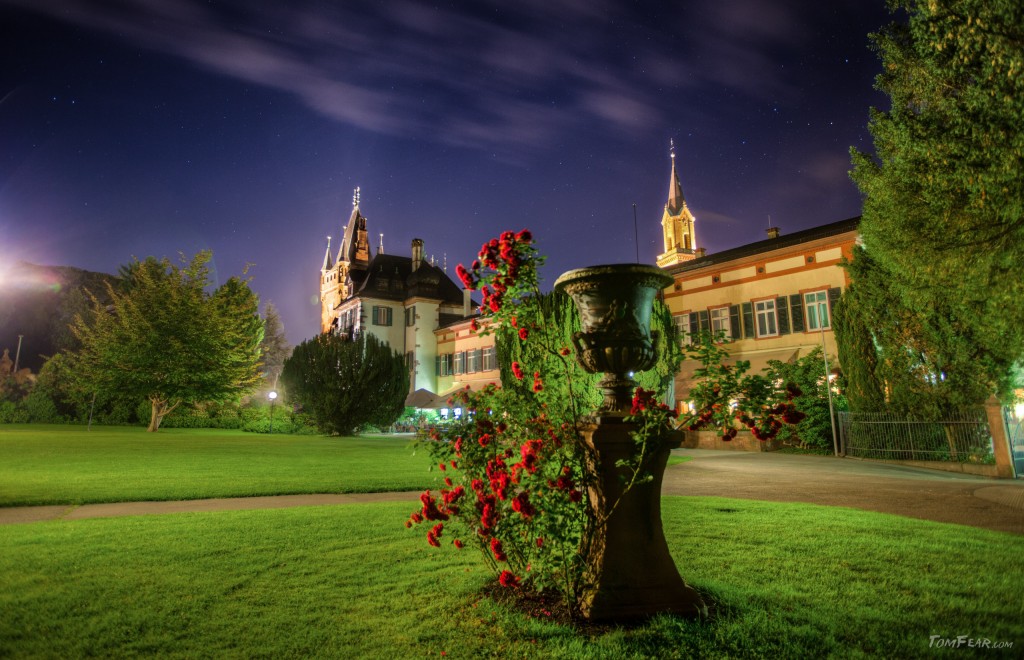