Another week has begun and again it’s monday, a bloomy monday. I shoot this flower on my trip through Norway and I don’t know what it is. The only thing I know, this little blossom, in fact it was only about 1cm in diameter, looked pretty to me and so I took a photo with my macro lens.
And now I wish all of you a nice and interesting week. From tomorrow on, I will show you, the whole week long, pictures from my Milky Way Adventure. If you are interested, stay tuned and read the full story on my homepage and enjoy the images. 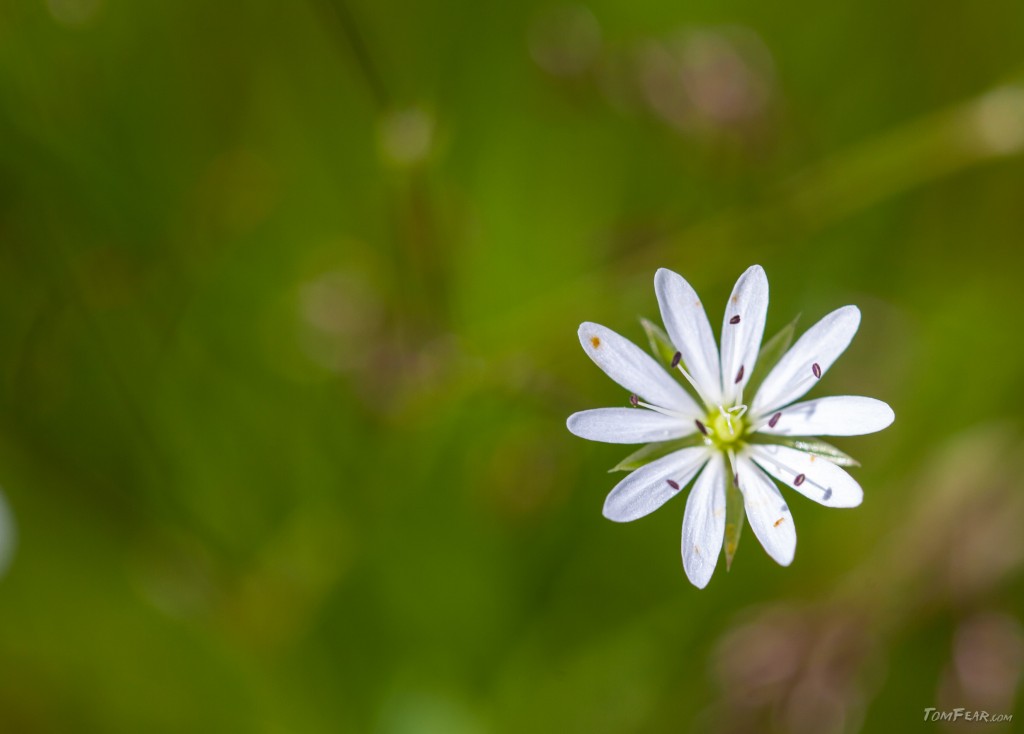 A spring sunset in Appenzell

It was a warm and sunny day in April, when I decided to stay a night in the nature at the Appenzell region in Switzerland. After I drove as far as I can up to the hill, I had to walk another several hundert meters of altitude difference up the hill to the peak of the Faehnerenspitz.
This time I was early enough to take pictures of the sun, the sun setting, the dusk and of course the starry night. This image was taken on the highest point and you can see the Säntis on the left and the city of Appenzell on the right. On the peak of the Säntis you can already see the light of to rising fullmoon.

The lavender of Banon

Last year we visited the Provence a region in France. We choosed the time when the lavender bloom is most impressive, in the middle of July. First I had some trouble to find larger lavender fields, but after a few tours with the car, I found some really nice places.
So I found this field with the lovely small and picturesque village of Banon. I was there while the hot sun was shining in the middle of the day. But what a boring images do you get at this time. As you know me, I like the nights for photo shooting, therefore I came back short after the sunset and took this colorful image of Banon and the surrounded lavender fields. 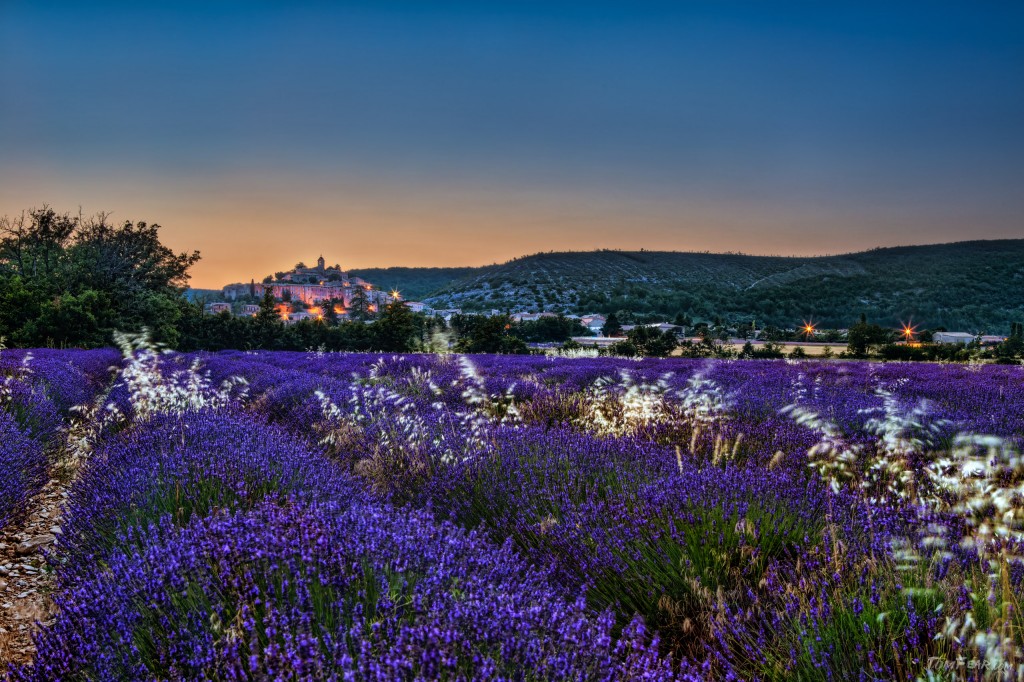 It was a sunny winter day, do you notice I’m dreaming about cooler days, where I was walking with my friend. You know, the small one with the furry breast. Anyway, I saw the deep standing sun und made some shots of the golden light and the blue sky.
What I didn’t see, was the rainbow like cloud in the sky. Do you see it? I read about it, it can happen, when the ice crystals in the clouds are breaking the light. But it was a nice surprise, at home on my computer, when I found it on the picture. 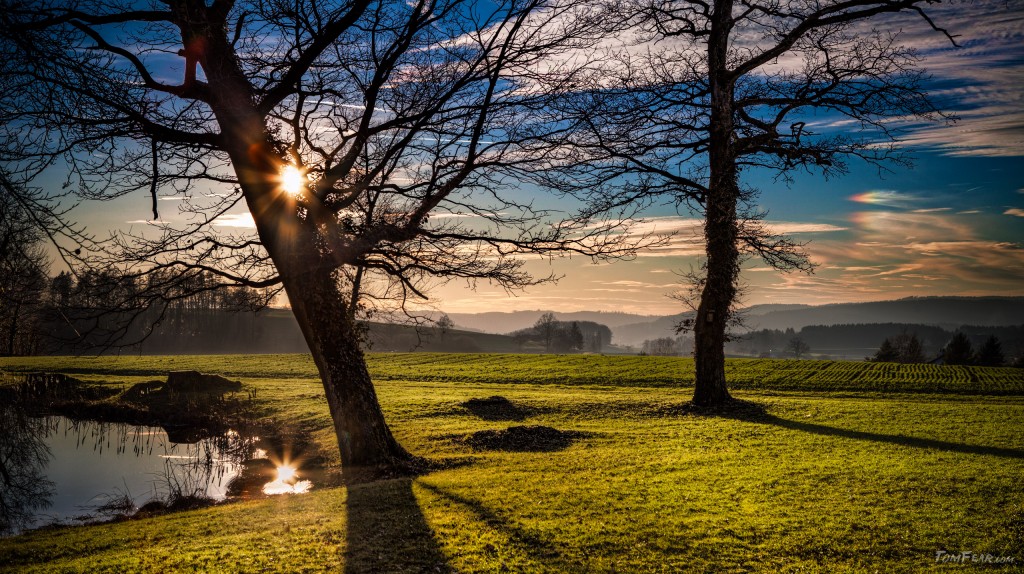 Boahh, it is so hot here! How nice must the winter be with pleasant temperatures and some cool ice, oooohhh it must be so commfortable! Good to know, that the hot days here in Switzerland are not constantly the whole summer long.
I think I need a shower to cool down… 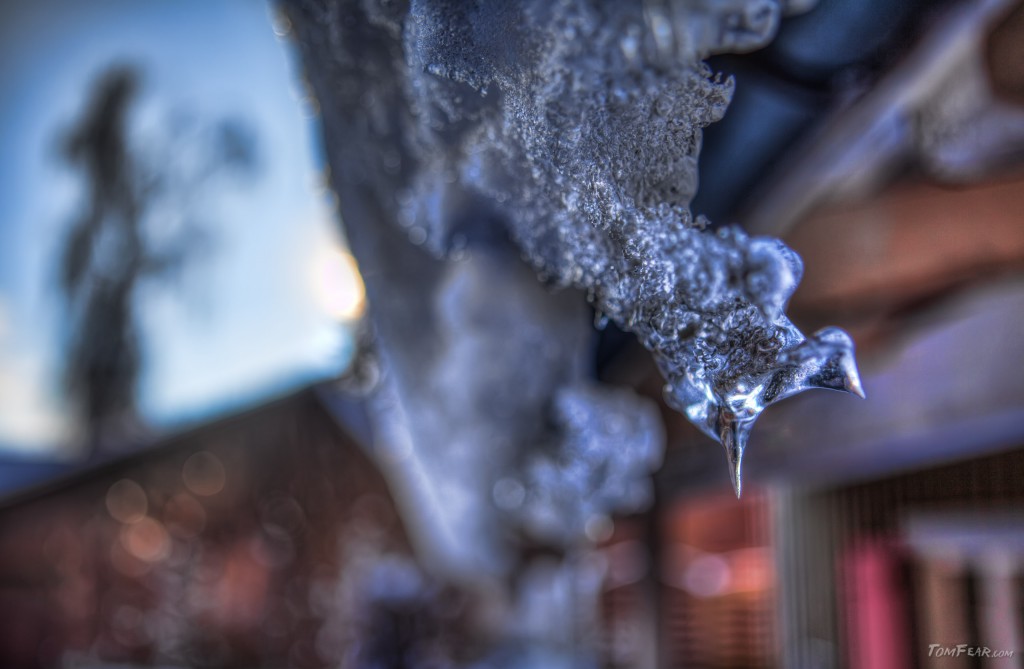 Now, when the grain fields are getting more yellow and days are getting hotter, we can see them again. The nice color spots on the barley fields.
Grain until the horizon and lonely in the center there is a flower, a poppy. The color so strong, sometimes the camera has problem to catch it without pixel errors. And the petals so fragile I wonder why the wind is not blowing it away.
Take care to our nature, it is so awesome! 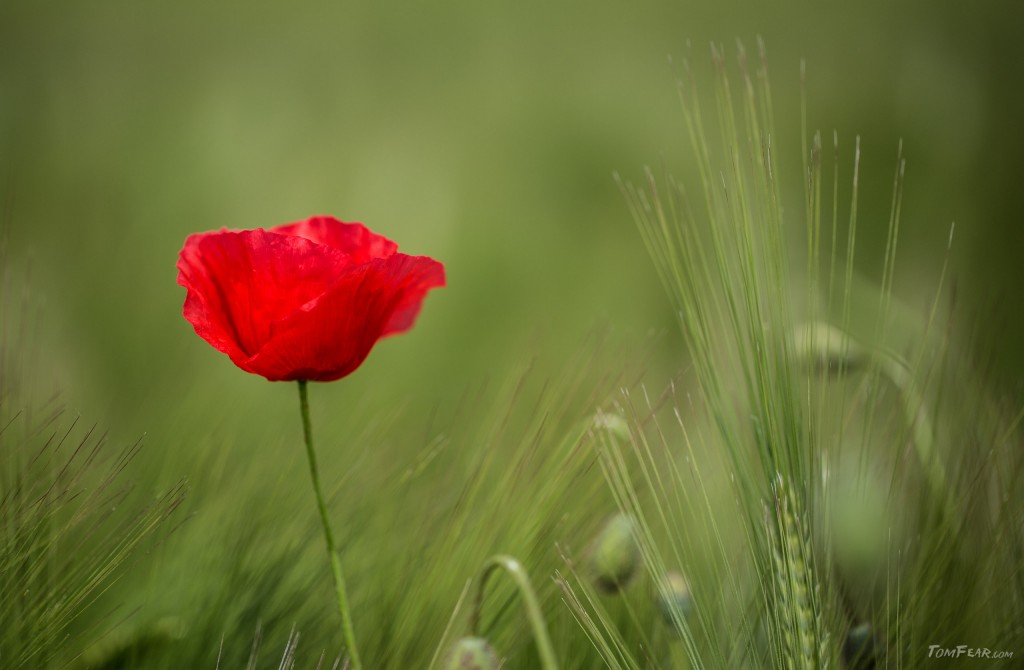 The most pictured animal

They are nearly on every photo, even if you don’t see them. You can do what you want, they likes to be photographed. If you try to shoot your dog, the dog is no more in the image but you can count on it, this animal is in focus. You don’t know of whom I’m talking about? Insects!
So, to the other things on the image. There is also a mountain in the background and a thistle in the foreground, both where to big to erase it in photoshop… 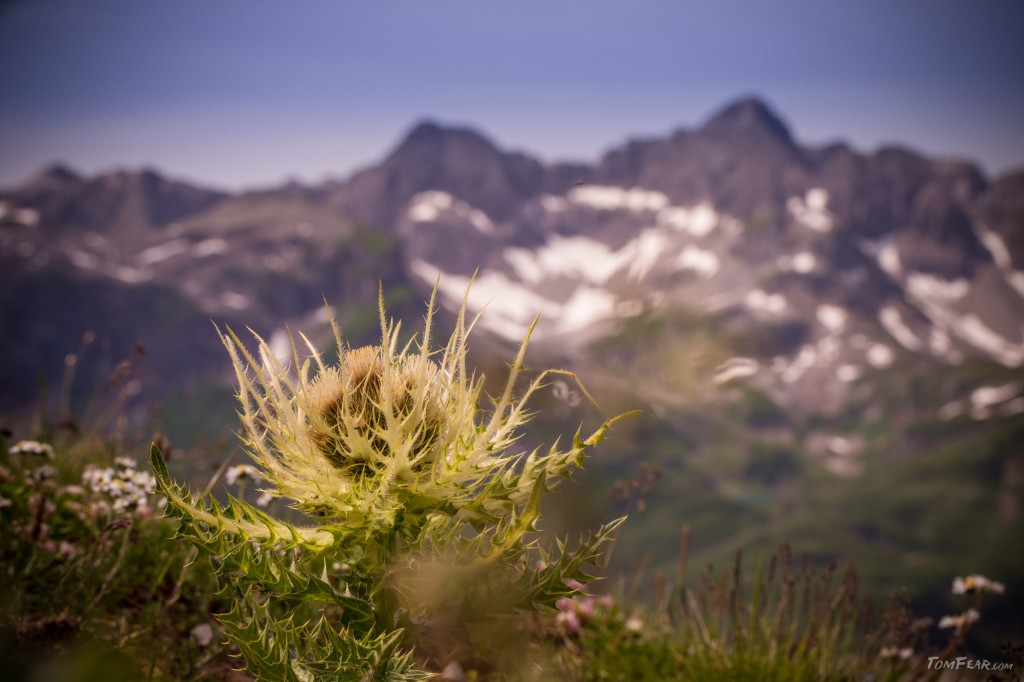 Grass in the wind

In the center of the image you see a smeary thing. These are grass blades moving by the wind, while I made a long time exposure image. It’s interesting to see only a strange smear… what do you mean? You do more like the rest of the landscape? Okay, I see – it’s also very nice

I shoot this image on the peak of the Mythen, you know, where I missed the sunset and made other images of the fog of sea. Ah by the way, this is only moonlight and not sunlight. Okay technically it is also sunlight… 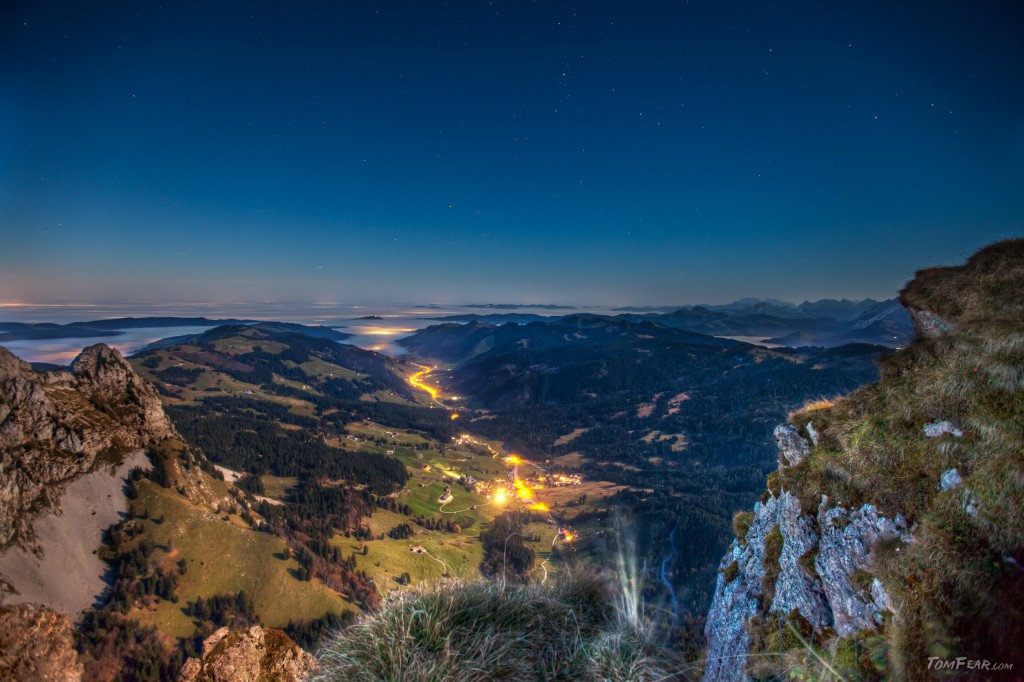 Yesterday I showed you an image about the sightseeing stage. In fact the Trollstigen is not the metal stage but the way up to this awesome view over the valley.
But if the racer in you is activated by this view, be warned, you can forget it! Either there is a bus blocking the street or more worse there is a car driver from a flat country without any experience on a pass.
So happend to me, after I left a hairpin curve, he comes slowly upwards toward me and stopped in the middle of the road. Yes he stopped and waited, because he was afraid of the curve. On a street as wide enough were two busses can crossing, this guy needed the whole street and was blocked by Fear! (hehe). I had no chance and I had to drive backwards through the curve again.
And the moral of the story, forget to enjoy this wonderful pass road, there is always a handicap on the road! 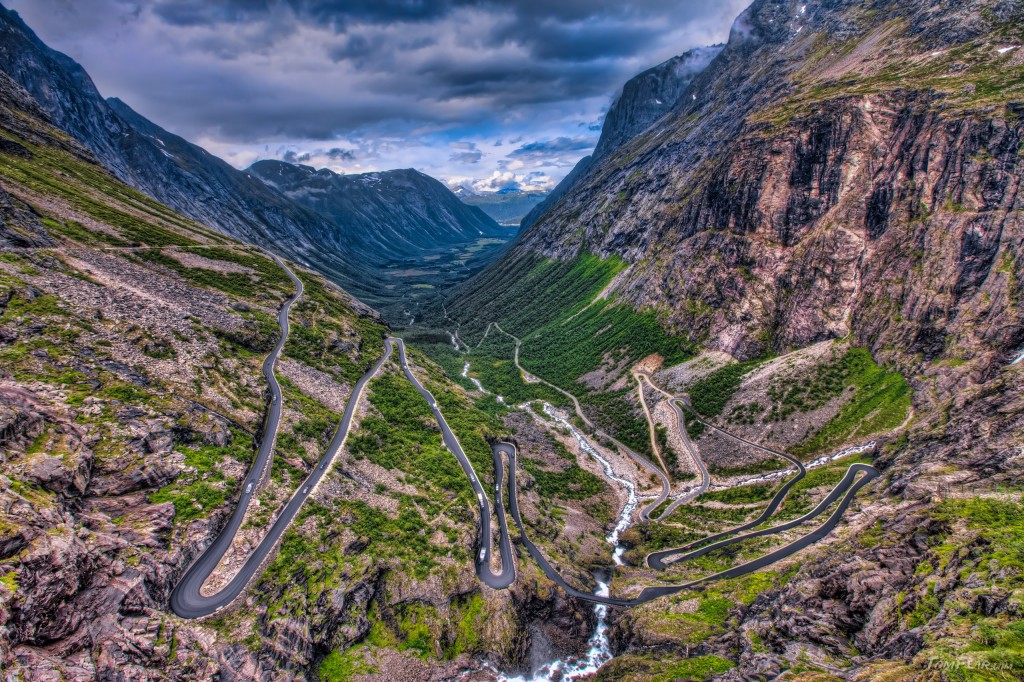 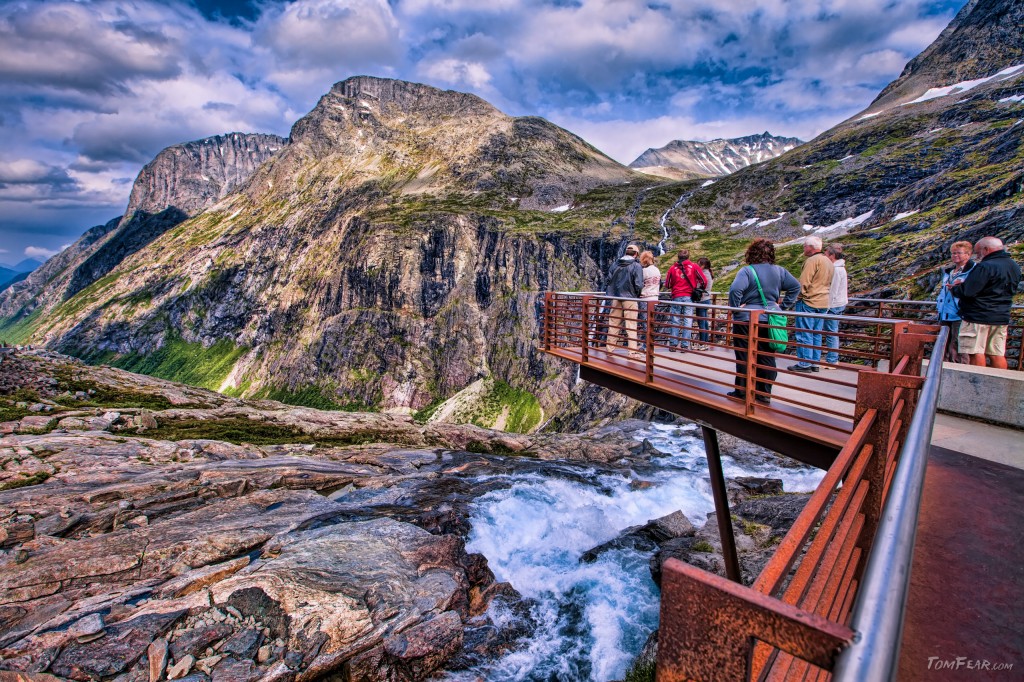