Okay, flowers are out. Now it is autumn and there are the sprouting mushrooms again. Allover in the wood you can find them.
And were the mushrooms are, there are also all the mushroom searchers not far. For me, it is too dangerous to collect mushrooms, you’ll never know what you have. Therefore I’m collecting the mushrooms only as images and resharing it virtually over the internet. 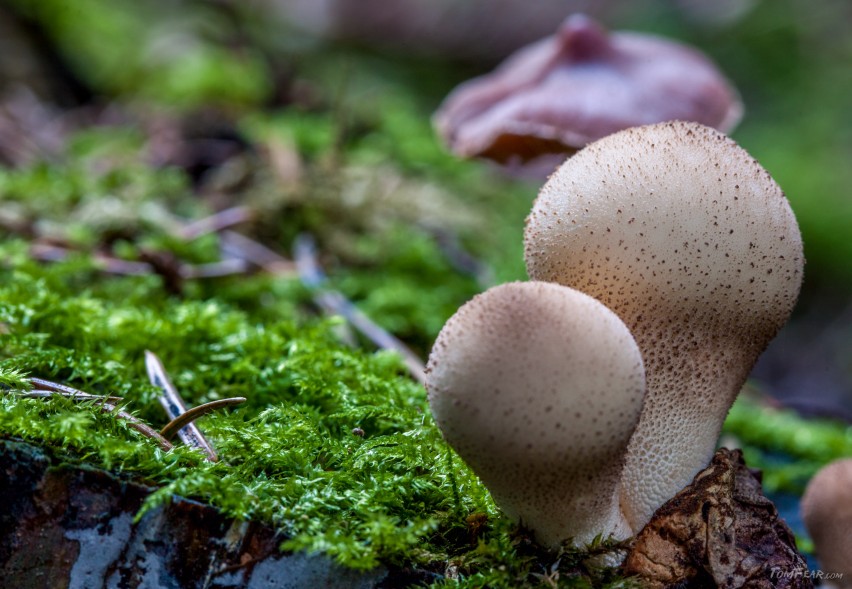 Nah, this doesn’t really work in english. The mountain in the center has the name Schreckhorn, which is translated something like Shockhorn, so…
In the light of the sunset, hidden behind thick clouds, you can nearly recognize it, the Schreckhorn. This over 4000m high mountain in the Alps, seems nearly close enough to touch it, but it is still many kilometers far away and difficult to reach it.
And for the near future I limit me for much easier hikings in more flaten regions, this thing is much too exhausting to me, but you’ll never know and you should never say never… 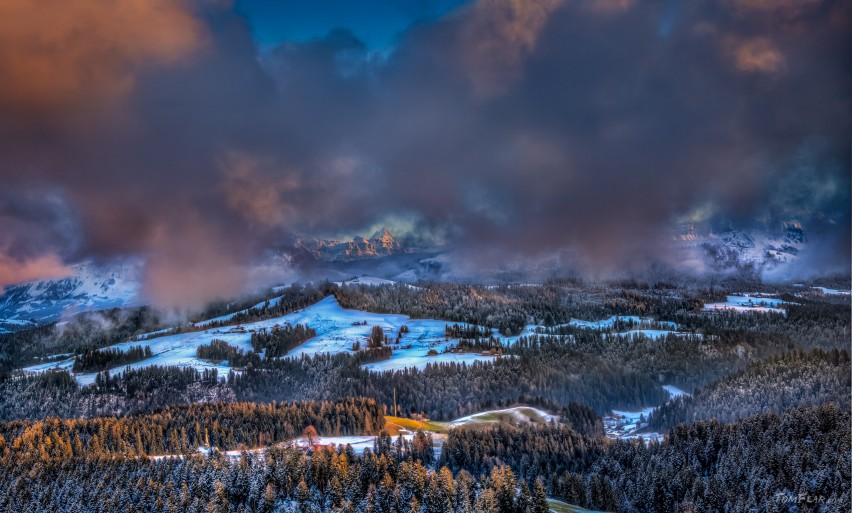 Nope, this is not a daylight shot, the sun was already hidden behind the horizon. Only the fullmoon was glowing at the sky and bathing the whole landscape in bright light.
I was lucky, because at this evening was nightly sledging announced, so I could, after the photo session, take a ride with the funicular back down. However I couldn’t stay behind the camera as long as I would, because thick clouds where coming up and covered the whole sky. Therefore I bundled up my gear early and was gone back to the valley again, where I could discover, that the clouds are gone again. 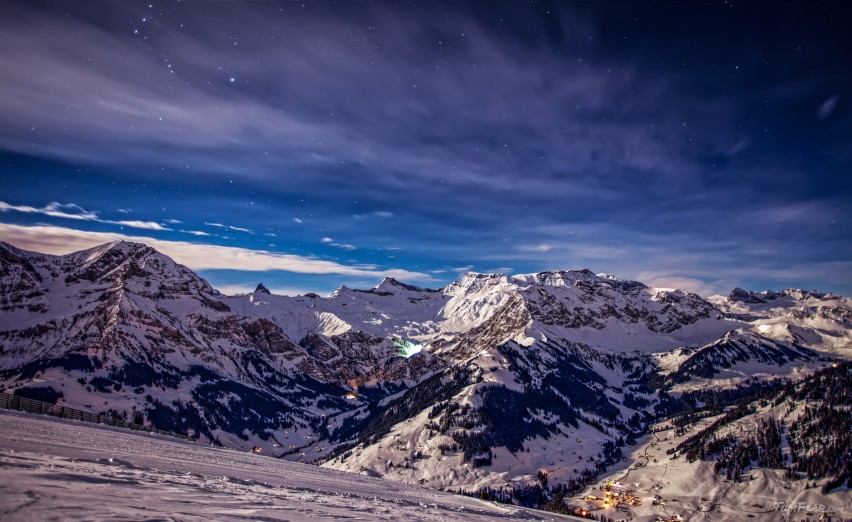 Thunderstorm in the Provence

The last few years, when we are going to a vacation, it is always raining. No matters where we are going, the rain is following us doggedly. But this hasn’t to be bad all the times, especially if in between is clearing off, then you get often some good opportunities for amazing images.
Just like here in the the Provence, where I could shoot directly from our balcony of our holiday flat this stunning sunset. Sometimes you have to use the opportunities you get offered. 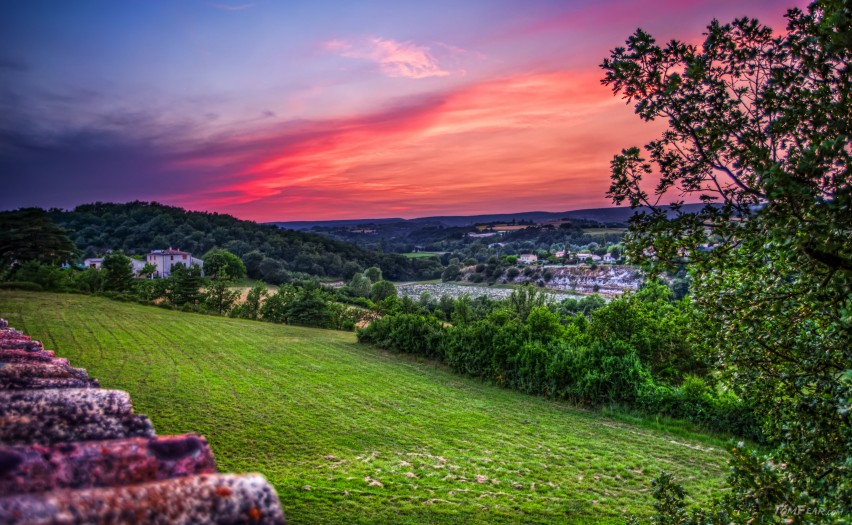 After some rainy days and missed opportunities, we left Lysebotn with the ferry on our way again through the wild fjordland of Norway.
On the half way to our landing place, where we can drive by car again, I took a picture back into the narrow Lysefjord with his high towering mountains on both sides. Yes, it would have been nice, to take a look down to the fjord from the top of the mountains, but rain and thick fog made us a line through the bill.
What a mess, now I have to drive again up to the north for another try… 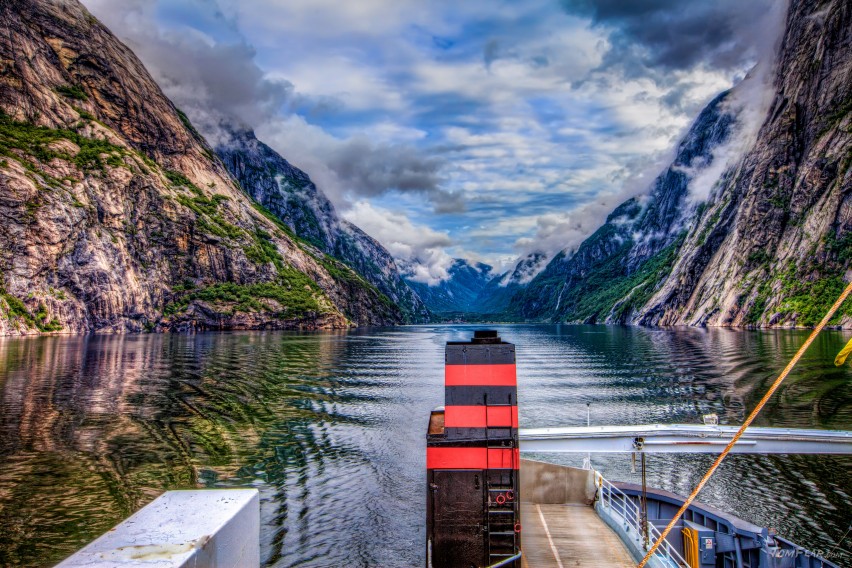 Winter in the alps

After a warm late summer day, some of you you may want to cool down a bit. At -10°C and fading sunlight on the crest is it definitely colder than now. For some of you are these temperatures too cold, but on the other hand there is wunderful powder snow, not like at the last winter. There you have to search the snow with a magnifier.
But now it comes first the autumn and hopefully it brings us some beautiful photo weather for some spectacular images. You will it see here what the weather has to offer us in the next few weeks. 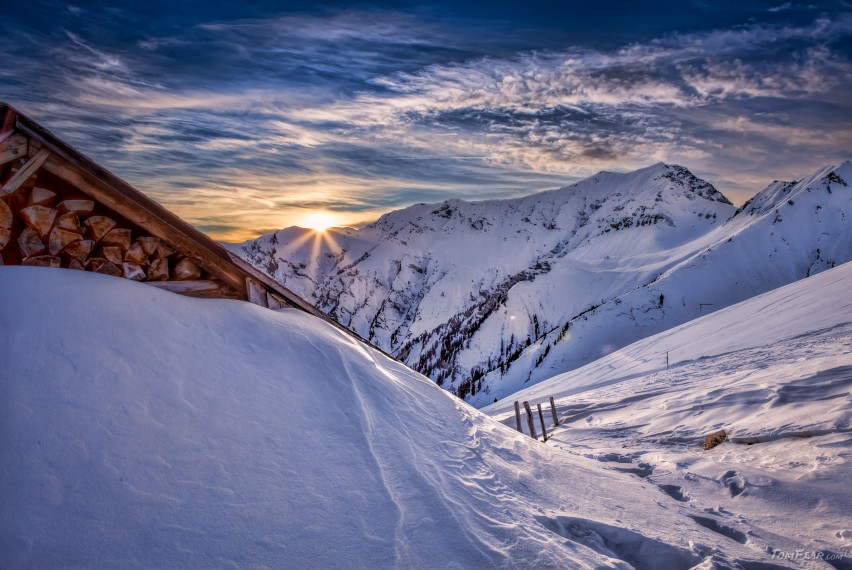 The mountain in the mirror lake

When the moon is shining, you can’t see the milkyway no more. But you can still see the stars, also if you shoot directly into the moon.
Here at the Graeppelensee, you know, where you can get wet feet, is the the near 2400m high mountain Schofberg, reflecting in the water. Meanwhile I am stalking with good footgear in the swampy area around. But at the end I reached my car with dry feet, thanks to the good shoes.

Sunset on the half way

Actually I wanted to enjoy the sunset peacefuly on the peak. But like mostly I was too late and the sunset started too early and I was still a good part away from the peak.
Therefore I took the rucksack of my back and shoot, at this really awkward place, a quick image out of my wrist. So you have to excuse the bad quality from this position, no comparision to an image from the peak with all these disturbing trees in the sight…

After the short stop, I had still to go a good piece upwards to the mountain and until I was on the top, the sun was already hided behind the horizon. 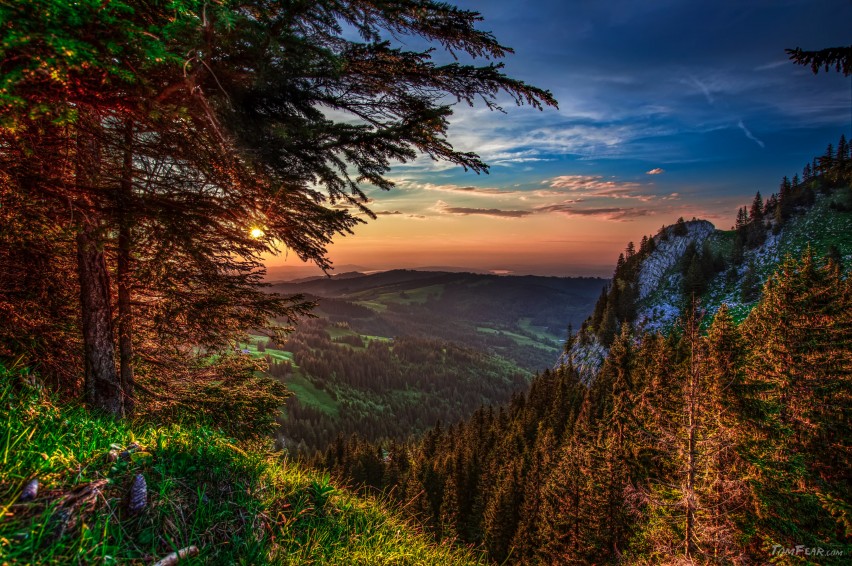 Once again a macro shot of something blooming. Free to the motto; it greens so green… In the spring there is already a pleasure, if you can discover a stunning green, after all the dirty brown tones during the winter time.
And like everytime I have no clue what it is. It was funny to look at, so I pulled out my cam and pushed the button. To hold the moment for bad times, like this summer, to have some enjoyable for the eyes. 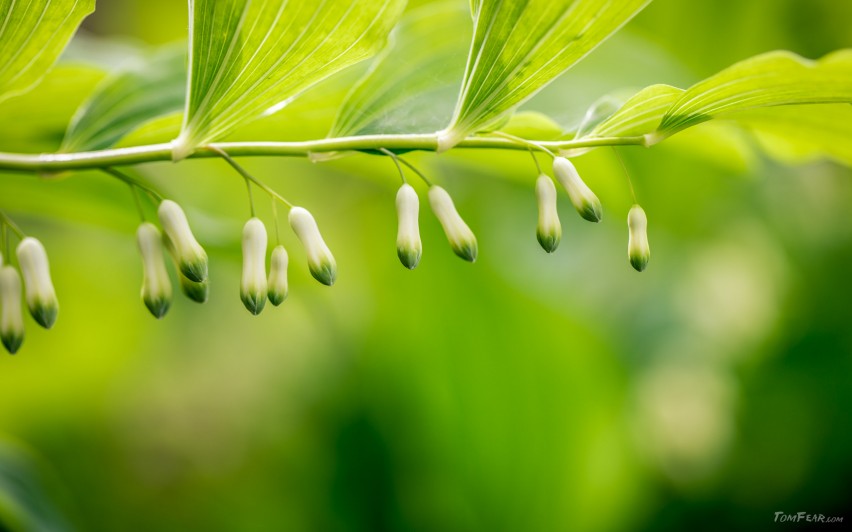