Looking for the Milky Way – Part 2

Today in In the second part I will write about the hike up to the destination. Yesterday in the first part I showed you the requirements for the best sight and part three will come to the final with the starscape image. 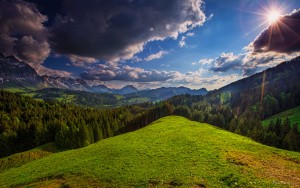 The clouds come and go

Finally, at 16:00 o’clock I went off . First pick up Stefan, and then head toward the Alpstein Mountains in the region of Appenzell. At about 17:30 we were on the Schwägalp our starting point to the Kronberg. Actually, there’s a cablecar up, but it only runs until 18:00. One can also stay at the Kronberg, but only on weekends, without a dog. As my friend Bubu was also with us, we had to walk up and down again.
So at 18:00 we went finally walking off towards Kronberg. The Santis was still enveloped by a huge black cloud. But in the other directions we could see the blue sky between smaller clouds. 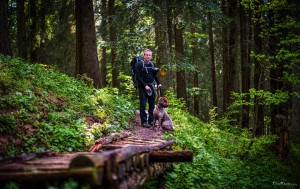 A broken bridge in the middle of the forest

So no reason to be concerned.
The march went first on an alpine meadow and then continued slightly uphill to the Chammhaldenhütte. Then it went down moderately but the way is pretty muddy. Shortly before the Schutzenälpli it goes a little upwards.

But now it’s getting hairy 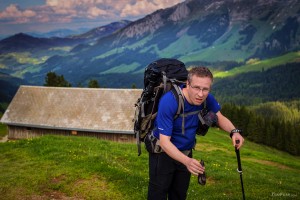 15kg of package pays its tribute

When we arrived at Langälpli there came the first problem, as a bull was standing in the middle of the pasture and we were with Bubu on a leash! If this is gonna work out …Thankfully it went well. But then the way got harder and harder. Now it goes uphill steeply and I had my heavy backpack full of equipment. Why do I always have to carry so much stuff with me? Eventually, after what felt like 10 hours, we arrived at the top, but I had to be extremely careful not to stand on my own tongue.

Finally on the top 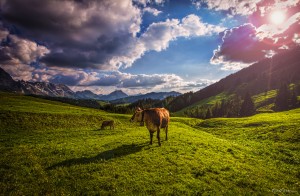 A cow idyll with sunshine

Now we had earned us a big dinner. Although we could not stay over the night, we were allowed to use the guest house.
After an opulent meal, I could make a few beautiful shots of the sunset before the dessert. However, there hung still a thick cloud over the Säntis, it did not look good for the Milky Way. After a little dessert and we had to wait until 23:00 when it was quite dark. 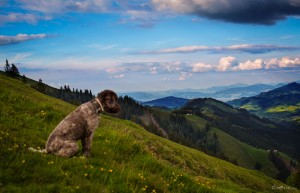 Bubu enjoys the view from the peak to the valley

Then I went outside for a short weather check to look at how bad it was with the cloud situation. And what was that? I could see the beacon on the Santis and and yes, YES are the stars around it! Just as told by the weather service earlier, the sky over the Santis was perfectly clear!

Read tomorrow in third and final part, whether we found the Milky Way or not.