On the top of the Sidelhorn

It was windy, cold and foggy on my steep way to the peak.
After my short excursion on the wrong way, I climbed the correct, steep trail up to the peak. Because it was already late, it quickly became dark. The good thing was, because it was so windy I was not sweating although it was really steep. And the wind was blowing and blowing, but it blows the clouds not away, the clouds becomes thicker and thicker.
Soon I saw, in the beam of my headlamp, the clouds flying past. Oh, no the wind didn’t blow the clouds away, he brings the clouds to me. Sigh, another night of effort without any reward, but now as near the peak I was now, I wouldn’t give up and I will bring it to an end.
The last part of the trail was not only steep, it was also stony and I had to climb from stone to stone through the dark and foggy night. Yes it was pitch dark, because of the new moon, which was the main idea, so I can see a clear and beautiful Milkyway. After I reached the top, the wind was still blowing and I was surrounded by thick clouds.
Only to the west I could see some stars. Therefore I put my backpack to the ground, took my tripod and mounted the 14mm lens on the A7s. Apart from some stars, I couldn’t see nothing, it was really, really dark. Okay, take some shots from the direction where I can see the few stars. Because it was so dark, i pumped up my camera up to 12800 ISO and then … BAMM!
Wow, look at the stars and you can see two glaciers, the Oberaar glacier and the Unteraar glacier. And behind the mighty Finsteraarhorn and the Schreckhorn. Yes, an impressive landscape! It’s too bad I couldn’t see the Milkyway because of the thick clouds around me. After a few shots I turned me around and… 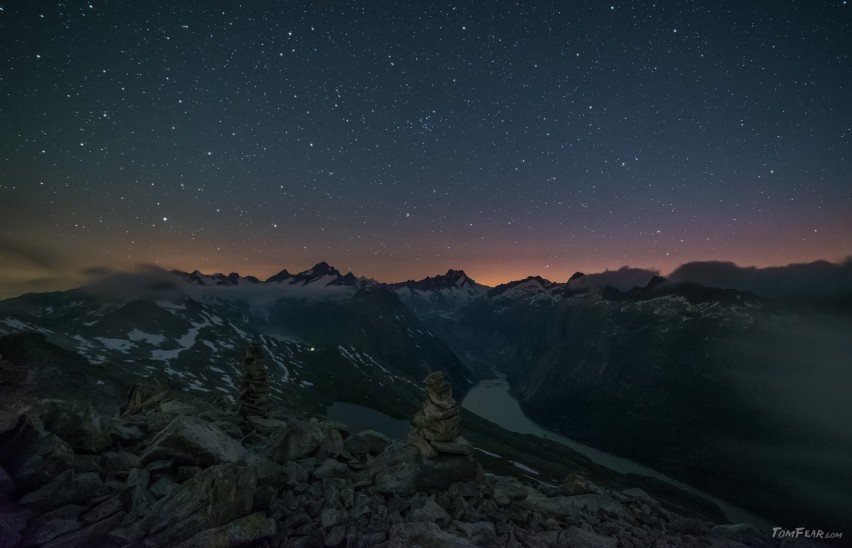